Outside the Box, for a number of new readers who have joined us, is a letter in which I feature someone else's work each week, and often it is a view contrary to mine. I have to continually remind readers that just because I include something in an Outside the Box doesn't mean that I agree with it. I think it pays us to read people we don't agree with.

John Maynard Keynes was an enormously influential economist, but some of his detractors complained that the opinions he expressed tended to change over the years. Once, during a high-profile government hearing, a critic accused him of being inconsistent, and Keynes reportedly answered with one of the following lines (accounts vary):

When events change, I change my mind. What do you do?

When the facts change, I change my mind. What do you do, sir?

When my information changes, I alter my conclusions. What do you do, sir?

When someone persuades me that I am wrong, I change my mind. What do you do?

I am rather well-known for suggesting that Japan was a bug in search of a windshield and in predicting that the yen would go 200 to the dollar. About four years ago, when the yen was at 100, I even purchased 10-year options, which were ridiculously cheap, with strike prices 20 to 30 yen higher. I was willing to be patient and wait for 10 years, if I had to.

I may have to wait for a lot longer if my friend Charles Gave is right. Bluntly, while it was clear to me as far back as seven or eight years ago that Japan was going to have to monetize its debt, I did not see any way on God's Green Earth that you could monetize at a rate of 150%-plus of your GDP, pushing it into the economy without creating some type of currency turmoil – in effect devaluing the currency. I mean, seriously, show me a place in all of history where that happened. I didn't bet the farm, but I did throw out some risk capital, putting my money where my convictions were.

Charles is arguing that the yen, far from going lower in value, is likely to go quite a bit higher. He begins laying out his rationale with a wonderful summary exposition of Irving Fisher's seminal 1933 article “The Debt-Deflation Theory of Great Depressions.”

Then Charles applies that thinking to the last 45 years of Japanese history. If he is right, and he may be, my yen options are going to expire pretty much worthless in six years. I'm not going to sell them at this point, but I am very seriously considering changing my mind.

The simple fact is that the Bank of Japan has bought significantly more than 100% of its GDP in Japanese bonds, is monetizing about's 6 to 8% of GDP every year by buying newly issued Japanese government debt, is now buying significant chunks of the Japanese stock market along with parts of the US and international stock markets – and the country is still in a basically deflationary environment, with extraordinarily low unemployment and no wage inflation.

So I’ll hit the send button and let you hear what Charles has to say about all this. The gym and my trainer are calling, and it’s chest day. I will get to come back and deal with the rest of the world after a few hundred reps. You have a great week!

Your observing facts he once thought he never would analyst,

1) The phase of price inflation. Nominal rates go up, while real rates go down. It thus pays to borrow in order to buy real assets. Servicing debt may be difficult should there be a temporary liquidity crisis. But repaying principal when loans mature is not a problem. During this phase nominal interest rates can reach very high levels. In this period there is a high velocity of money.

2) The phase of asset inflation. Nominal interest rates go down structurally, but real interest rates go up. This monetary illusion gives borrowers the false impression that borrowing is very cheap, since the nominal cost keeps going down. However, the reality is that while servicing debt is cheap, rising real rates make repaying principal tougher and tougher. During this period the velocity of money remains strong, with most of the money going to buy existing assets. One day the return on invested capital falls below the cost of capital, and the economy moves into the next stage.

3) The phase of debt deflation. Every borrower struggles to repay debt. The velocity of money collapses, which causes prices to collapse, which leads to higher real rates. Historically it takes around 10 years for the banking system to finish going bust, which naturally keeps the velocity of money suppressed.

4) The final phase is what 19th century economists called the secondary depression, which can last as long as 20 years. During this phase not much happens for as long as the generations who suffered from the financial collapse and the debt deflation are still around. In this period, the velocity of money remains close to zero, with nominal interest rates also close to zero but offering a positive real yield. This makes plenty of sense.

If by now you are marveling at how closely Japan’s economic trajectory over the last 45 years or so has fitted Fisher’s theoretical framework, you are not alone. As the chart below shows, Japan is now approaching the 18th year of its secondary depression. So as the economy continues to follow the path mapped by Fisher, investors should start to look for signs that Japan is beginning slowly to emerge from this secondary depression phase. 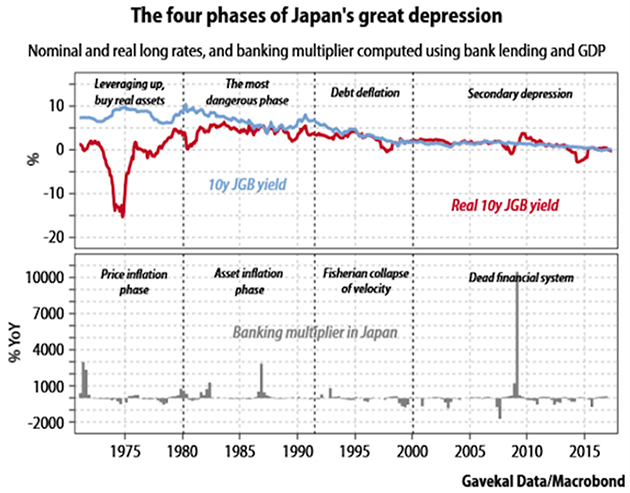 One sign would be a rise in the velocity of money as commercial banks start to lend again. And guess what? If you use a microscope, you can see that the velocity of money in Japan is indeed starting to creep up. Admittedly, the increase is small, just 2% year-on-year, but everyone has to start somewhere.

I am starting to wonder if Japan, having been the first economy to enter debt deflation, will now be the first to emerge from it. After all, companies in Japan have close to US$4trn in cash. They are trading on a “normal” P/E ratio. Corporate profits have been growing at a faster rate in Japan than in the US for the last five years. And during that time the Japanese stock market has massively underperformed US shares. On top of that, Japan is the world leader in everything to do with labor shortages. And according to Will and Udith a labor shortage is exactly what much of the developed world is facing (see It Is Not Slack Weighing On Wages).

The great beauty of these recommendations is that nobody, but nobody, is positioned accordingly.