In today’s Outside the Box my good friend Charles Gave shares an instructive “Tale of Two Countries.” Since 1981 in the UK and France, structural growth rates have diverged: The rate has fallen by two-thirds in France, while in the UK it has risen. Why? Well, to begin with, in the UK Margaret Thatcher was elected prime minister in 1979 and almost at once reduced the role of the bureaucracy in managing economic activity and dialed back government spending as a percentage of GDP. Meanwhile, in France, François Mitterrand was elected president in 1981 on a platform that expressly aimed to expand the scope of government.

The effects on growth were predictable, says Charles, having been explained by Joseph Schumpeter in his 1942 book Capitalism, Socialism and Democracy.

More recently, in the US, when government spending as a percentage of GDP shot up from 33% to 39% during the Great Recession, our growth rate fell from 2.5% to less than one percent. And that, says Charles, is the story on US stagnation – not the more fashionable narrative of “secular stagnation.”

He challenges readers to cite one case in the post-1971 fiat-money era when a big increase in government spending did not lead to a structural slowdown. Very interesting reading and certainly an Outside the Box viewpoint.

GoGo Online tells me I’m over Cleveland, flying by my friends there at 34,000 feet on my way to Boston for a few brief meetings before I fly right back tomorrow morning. But my team tells me the meetings are important enough to get me on a plane to be in Boston for less than 20 hours. Plus hassling with airports. You have to trust the team!

I have been using the past few weeks to try to catch up on my reading and email, but I think it was Solomon who first said that of the writing of books there is no end. And that’s when they did it on papyrus scrolls.  But with the internet? With millions of writers? Solomon had it easy! Of course, he had 500 concubines (or something like that – I forget), so he had other distractions as well.

I am struck by the amount of serious academic research coming out on how deep our partisan divide is in the US and much of the rest of the Western world. We truly have lost the shared values, that “we’re all in this together” attitude that I seem to remember from my youth. We simply don’t trust the “other team” and in general don’t associate with them. Of course, you and I are the exception. And thus when we read about the divide, we wonder what world the authors are describing. Certainly not ours!

But… it’s a very clear trend and it’s disturbing me. I worry about how we’ll handle the Great Reset when it hits. Crises are not particularly good times for deeply nonpartisan solutions to come into being.

But for now it’s summer, and Saturday we leave for the Virgin Islands to get married and have a week-long break together, so I think I’ll shelve my mood breaker for a few weeks. And you have a great week, too!

Your loving the diversity of his own friends analyst,

So We Are In Secular Stagnation...

…really?  I would advise readers to consider the chart below.

On first blush, its lower pane supports the stagnationist camp. After all, both the US and France have seen a slump in their “structural” GDP growth rate, as shown by the seven year moving average. Since 1977 this measure has fallen by a third in the US, and by two thirds in France. Yet, look at the chart’s top pane and it is clear that this growth slump has hardly been generalized. Since the late 1970s, Sweden, the UK and Switzerland have seen their growth rates rise structurally, and the same pattern can be found with Canada, Germany and Australia. 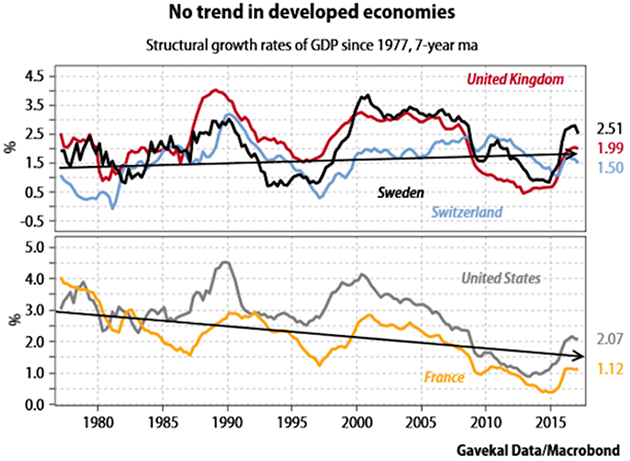 So why have certain economies tumbled into relative decline, while others have not? A useful approach may be to compare France and the UK, which are similar in size, population and demographic profile. Both countries are European Union members with big banking sectors that in recent decades have had to manage profound de-industrialization.

Consider the chart below which shows a ratio of real GDP in France and the UK. No adjustment is made for currency movements as this will introduce unnecessary noise into the analysis. The obvious point  is that between 1955 and 1981, France’s economy massively outperformed the UK’s. Since 1981, the reverse has been true. 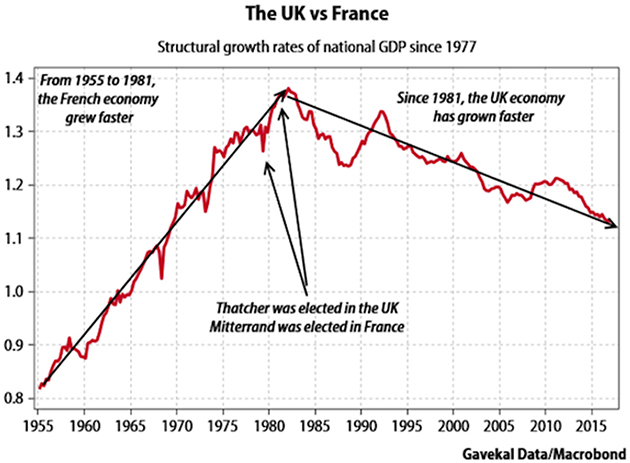 The trend change corresponded to a political shift in both countries as to the proper role of the state. Under Margaret Thatcher, the UK forged a new path by lessening the role of civil servants in managing economic activity. In France, François Mitterrand expressly aimed to expand the scope of government. 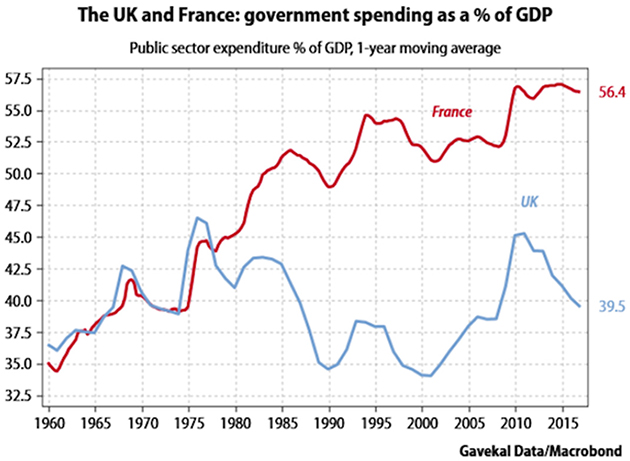 To be sure, the UK Labour Party got back into power in the late 1990s and spent the next decade running socialist policies that caused government spending as a share of output to rocket higher. Fortunately, sanity was restored after 2010 when a Conservative-led government dialed back UK public spending. In France, the picture is different as there have not been politically-inspired changes in the trend of government spending—the ratio has simply ground higher, irrespective of who was in power.

The next task is to explore potential cause-and-effect linkages between public spending and the divergence in the structural growth rates of France and the UK. As such, consider the chart below which reconciles growth and government spending in the two economies. 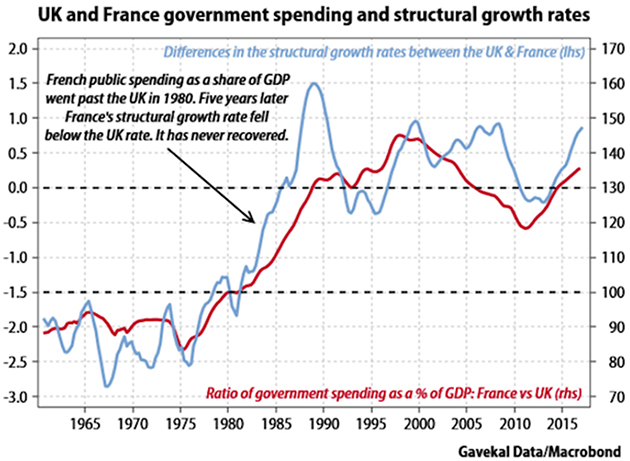 The chart above shows that in 1980 France started to spend more on government than the UK. By 1985, France’s structural growth rate slid below the UK rate and has not recovered. The logic behind this chart has been borne out in many economies: beyond a certain threshold (that varies by country) more state spending causes the structural growth rate  to fall. This relationship follows, as in a government-dominated economy “destruction” of inefficient activity is all but impossible, which in turn limits the scope for fresh “creation”. This insight was explained by Joseph Schumpeter in his 1942 book Capitalism, Socialism and Democracy.

What about the US?

In the US, a similarly straight forward picture emerges, with the big increase in government spending that took place after 2009 being the main cause of the subsequent decline in the US’s structural growth rate. 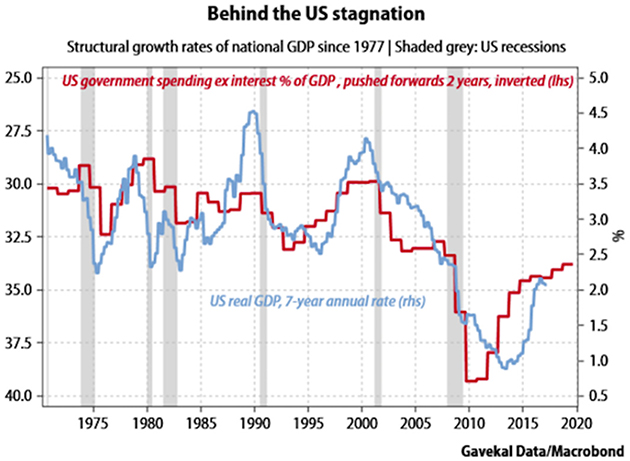 By way of contrast, consider the reverse case of Canada, which in the mid-1990s slashed government spending to good effect. In two years Canadian government spending was cut from 31% of GDP to about 25%. The ensuing 18 months saw predictable howls of protest from economists that a depression must follow. In fact, not only was a recession avoided but Canada’s structural growth rate quickly picked up and in the next two decades a record uninterrupted economic expansion was achieved. 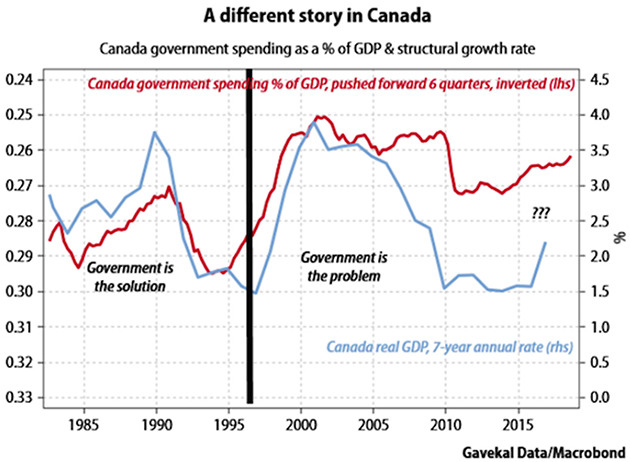 As an aside, I would ask readers to cite one case in the post-1971 fiat money era when a big rise in government spending did not lead to a structural slowdown. Alternatively, if they could cite an episode when cuts to public spending resulted in the growth rate falling. I am always willing to learn and change my mind!

To conclude, “secular stagnation” is an idea of ivory towered economists.  Schumpeter showed how bloated government and unnecessary regulation crimps activity. The perhaps unfashionable answer remains to privatize state enterprises, deregulate markets and break up too-big-too-fail banks. In simple terms, some government is good; too much government is bad.