George Friedman was one of the featured speakers at Mauldin Economics’ annual Strategic Investment Conference that was held last week in Dallas. In true Texas style, we corralled George for a one-on-one talk and picked his brain on a few topics that are currently grabbing media headlines: Trump, immigration, trade, Mexico, and China.

To see what he had to say, click on this video screenshot—or read the transcript below…

Mauldin Economics: What would a Trump presidency mean for Mexico?

George Friedman: Very little. Mexico is the primary export target for California and for the entire American Southwest. If you disrupt that flow, you’re going to have a revolt from the western states like you’ve never seen.

ME: So the wall is not going to be built.

GF: The wall can be built, but what is it going to accomplish? The trucks had better come through. And this is really the problem.

The wall as a concept is, “We are going to protect ourselves from Mexico.”

In a way, I understand what Trump is saying, which is that we have to have a nationalist foreign policy.

But in this particular case, working closely with Mexico is a nationalist foreign policy.

ME: So, ultimately, you think the rhetoric is overblown. And if Trump were to be elected, the relationship would probably continue on the way it has been. Or do you see major changes actually happening?

GF: The problem is that the American president is the weakest leader in the Western world. He has very little power.

None of the things he’s talking about doing can he do without Congress’s support.

And this is why I’m saying that it’s all very well that he wants to do it. But I think the California delegation, they’d have a problem; same with the Texas delegation.

So in Congress, if you have Texas and California against you, you’re not going to get it done.

As Obama learned with many of his initiatives, simply having a good idea doesn’t pass. So, very little is going to change.

But he’s going to have to work on his relationship with Mexico. This is a serious country, and he’s burned a lot of personal bridges. 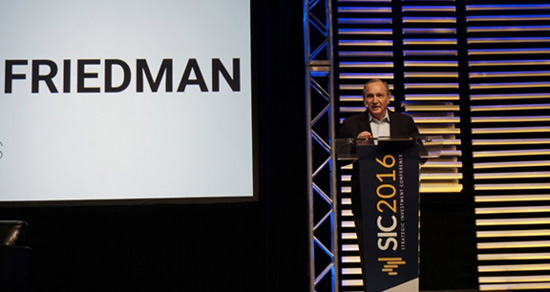 ME: There are two countries that Trump talks about all the time. One is Mexico and the other is China. Realistically, what is that relationship going to look like under a Trump presidency?

GF: He is dealing with China as it was many years ago. In fact, when you hear him on his foreign policy, he’s describing realities that haven’t been true for five or 10 years.

The waves of immigration from Mexico haven’t been happening.

China has not been surging exports into the United States; other countries have.

There is kind of a time warp in how he approaches things. There’s a basic principle that the United States has to watch out for its self-interest, which I think is valid.

I’m not sure he understands the current situation. But then he’s talking to a public that may not understand it either. And he’s using it.

ME: Where is free trade going to end up under a Trump presidency?

GF: Well, free trade has generally, globally, turned into a disaster. Those countries that depend on exports have been smashed. Because in the end, they’re dependent on their customers being able to buy.

And [in a] situation where customers can’t buy, you have a kind of domino effect toppling economies.

So not being an effective exporter is beneficial to the United States right now.

ME: What do you think is maybe the most danger and what’s the most positive aspect of a potential Trump presidency?

GF: The fact is, he has 500,000 troops available in the US Army. Of those, about 300,000 are non-combat troops. He can’t invade countries with that many people successfully. But then he’s not planning to.

He’s planning a much more conservative foreign policy in which we involve ourselves only as it benefits the United States.

The one thing I think is healthy that he’s saying is that we’re going to stop trying to build nations. Let them build themselves.

I think, as in many cases, the candidate has crafted himself for his base. The question is, is he sophisticated enough to understand that as president he’s going to behave differently?

That’s not a bad thing under the circumstances.