Harry Dent gave a speech I listened to a while back, and I got him to transcribe it for this week's Outside the Box. One thing about Harry is, you are never left wondering what he thinks about a topic. He sees inevitable demography-caused deflation in our future and makes some very intriguing arguments that deserve pondering.

At the end is a link to another report and a way to subscribe to his letter, if you are interested in more of his perspective. But first, I suggest you read this straightforward, informative presentation. There is also a link to the actual video of him speaking, should you prefer that.

This evening I am still in Carlsbad, California, where it has been an absolutely marvelous night. Rather than go back to Dallas before I have to be in Palo Alto on Thursday, I am staying in California and splitting my time between resorts in Carlsbad and Palo Alto. Tough life on the road and all that.

I got to spend the evening with my great friend David Brin (Science Fiction Hall of Famer, whose latest book, Existence, is totally a boffo experience – get it!), along with Doug Casey and Doug Hornig (a serious writer of about ten books, including a few sci-fi books, and now works for Casey Research). The topics ranged all over the spectrum. It was one of those nights you live for. And the next few days are going to be solid, as well. I get to see some cool new stuff and some old friends in Palo Alto while waiting to speak on Thursday at the Altegris event there. And then it's back to Dallas on Friday, where I get to write another letter for you. Until then, have a great week!

A Decade of Volatility: Demographics, Debt, and Deflation

By Harry S. Dent, Jr., author of The Great Crash Ahead and editor of Boom & Bust

To watch a video version of this presentation by Harry Dent,
please click on the following link:
http://survive-prosper.com/A-Decade-of-Volatility/

Most of you reading this expect inflation in the years ahead, right? Well, I don't. In fact, I am firmly in the deflation camp.

We got deflation in prices… every time.

This time around, with the latest bubble peaking in 2007/08, the outcome will be exactly the same. There is deflation ahead. Expect it. Prepare for it.

But the bubble-bust cycle that history has allowed us to see is not the only reason I'm so certain we're heading for deflation and a great crash ahead. I have other, irrefutable evidence…

For one, there is the most powerful economic force on Earth: demographics. More specifically, the power of the number 46. You see, that's the age at which the average household peaks in spending.

When the average kid is born, the average parent is 28. They buy their first home when they're 31… after they had those kids. When the kids age into nasty teenagers, the parents buy a bigger house so they can have space. They do this between the ages of 37 and 42. Their mortgage debt peaks at age 41. And like I said, their spending peaks at around 46.

From cradle to grave, people do predictable things… and we can see these trends clearly in different sectors of our economy, from housing to investing, borrowing and spending, decades in advance. 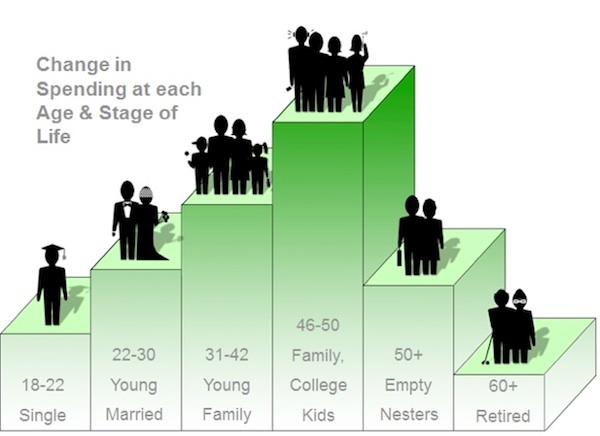 This demographic cycle made the crash in the '30s and the slowdown in the '70s unavoidable. Now it is happening again... with the biggest generation in history – the Baby Boomers.

Consumer spending makes up more than two-thirds of our gross domestic product (GDP). So knowing when people are going to spend more or less is an incredibly powerful tool to have. It tells you, with uncanny accuracy, when economies will grow or slow.

Why Deflation Is the Endgame

Think of it this way: the government is hellbent on inflating. It's doing so by creating debt through its quantitative easing programs (just for starters). But what's the private sector doing? It's deflating.

That looks like a no-brainer to me. Private outweighs public three to one. And the private sector is deleveraging as fast as it can, just like what happened in the 1870s and 1930s. History shows us that the private sector always ends up winning the inflation-deflation fight.

Now, I will concede that this is an unprecedented time. Today governments around the world have both the tools and the determination to fight deflation. And they are desperate to keep it at bay because they know how nasty it is (they, too, are students of history).

How bad is it? Think of deflation like what your body would do with bad sushi. It would flush it out as fast as possible. That's what our system is trying to do with all the debt we accumulated during the boom years. It's what the system did in the 1930s. Back then we went from almost 200% debt-to-GDP to just 50% in three years. It hurt like hell. The government doesn't want this painful deleveraging.

The problem is, the longer the government tries to fight this bad sushi, the sicklier the system becomes. I know this because it's what happened to Japan…

Japan's bubble peaked in the '80s. When the unavoidable deleveraging process began, the country did everything in its power to stop it. How is Japan doing today, 20 years after its crash? It is still at rock bottom. Its stock market is still down 75%.

Think of it another way: what is the biggest single cost of living today? Is it gold? Oil? Food? It's none of these. It is housing. And what is housing doing? Dropping like a rock. It can't muster a bounce, despite the lowest mortgage rates in history and the strongest stimulus programs anywhere… ever.

The Fed is fighting deflation purposely. It will fail.

Why the Fed Will Fail in All Its Efforts

There is simply no way the Fed can win the battle it's currently waging against deflation, because there are 76 million Baby Boomers who increasingly want to save, not spend. Old people don't buy houses!

That's the future of real estate. That's why real estate has not bounced in Japan after 21 years. That's why it won't bounce here in the US either. For every young couple that gets married, has babies, and buys a house, there's an older couple moving into a nursing home or dying.

I watch this same demographic force move through and affect every other sector of the economy. The tool I use to do so is my Spending Wave. This is a 46-year leading indicator with a predictable peak in spending of the average household. 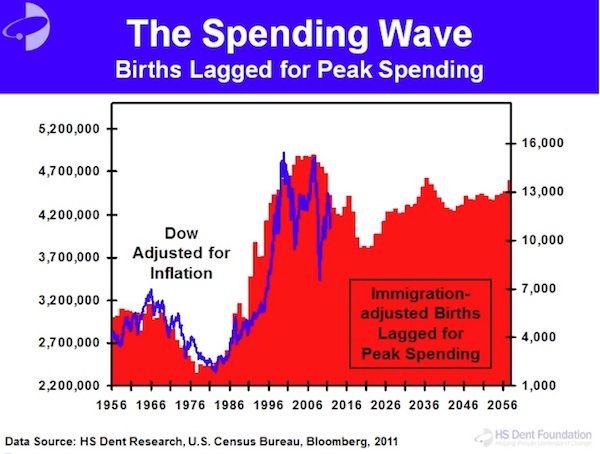 Here's how it works: the red background in the chart above is the Dow, adjusted for inflation. The blue line is the spending wave, including immigration-adjusted births and lagged by 46 years to indicate peak spending. If you ask me, that correlation is striking.

Today demographics matters more than ever because of the 76 million Baby Boomers moving through the economy. That's why I don't watch governments until they start reacting in desperation. Then I adjust my forecasts accordingly.

Don't Hold Your Breath for the Echo Boomer Generation

But all this talk about Baby Boomers inevitably births the question: "Surely the Echo Boom generation is coming up right behind their parents. They'll fill the holes, right?"

It's not all doom and gloom, though. We will see another boom around 2020-23. But for now, all the Western countries will slow, thanks to the downward demographic trend sweeping the world. Some are slowing faster than others are. For example, Japan is slowing the fastest (it actually committed demographic kamikaze, but that's a discussion for another day). Southern Europe is next along in its decline. Eastern Europe, Russia, and Asia are following quickly behind.

Which brings me back to my point: there is no threat of serious inflation ahead. Rather, deflation is the order of the day. The Fed thinks it can prevent a crash by getting people to spend. To that I say, "Good luck." Old people don't spend money. They bribe the grandkids, and they go on cruises where they just stuff themselves with food and booze.

Do you know how to tell if you're buying a car from an older person? It's going to be ten years old and have only 40,000 miles on it. They drive 4,000 miles a year. They just go down the street to get a Starbucks coffee and a newspaper. Then they go back home. How do you know you're buying a car from a soccer mom? It's driven 20,000 miles a year, carting the kids around all day… to school, soccer practice, whatever. This is the power of demographics.

So let me tell you what causes inflation. It's young people. Young people cause inflation. They cost everything and produce nothing. That's inflation in people terms.

Why did we have high inflation in the '70s? Because Baby Boomers were in school, drinking, spending their parents' money. While this was going on, we experienced the lowest-productivity decade in the last century.

Do you remember the 1970s? We had worsening recessions as the old Bob Hope generation began to save more while the Baby Boomers entered the economy en masse… at great expense. It costs a lot of money to incorporate young people, raise them, and put them into the workforce.

Then suddenly, in the early '80s, like some political genius did something brilliant, the economy started growing like crazy, and inflation fell. You know what that was? That was the largest generation in history transitioning en masse from being expensive, rebellious, young people to highly productive yuppies with young new families. It was the move from cocaine to Rogaine.

The correlation between labor force growth and inflation is crystal clear… 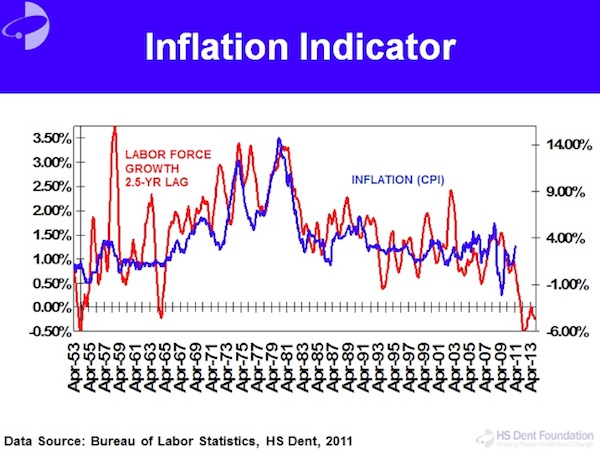 We saw it in the 1970s, we see it in emerging markets, and we'll see it ahead as the Baby Boomers head off into the sunset. First, there was inflation. Ahead is deflation. No doubt about it.

Harry Dent, the editor of Boom & Bust, has put together a free report for John Mauldin's readers, called: Survive and Prosper in This Winter Season: Take These Steps Now... Before Dow 3,300 Arrives. You can access this free report by clicking on this link: http://www.boomandbustinvestor.com/reports/current/BoomandBustInvestor_WinterSeason.pdf