This week’s Outside the Box is a little bit different. I’m going to start with a selection from Mohamed El-Erian’s latest note. Mohamed himself is soft-spoken and calm, and I tell you that because the piece that follows is as close to capitals, underlining, and bolding with lots of exclamation points as Mohamed can get. He continues to get more concerned about the direction of central bank policy around the world and its unknown and unintended potential consequences. I will just cut and paste part of Mohamed’s essay into this introduction.

I want to follow up with a presentation by Kevin Wilson at Blue Water Capital on Japan. Basically, this piece illustrates the potential problems created by the current philosophical direction that the Bank of Japan is taking in their country. Essentially, Kevin is talking about the policy failure of Abenomics and the unintended consequences of negative interest rate policies (NIRP). A major economic disruption in Japan would have significant effects on the global economy. His summary sentence?

Given Japan's massive debt and demographic headwinds, the oncoming recession may trigger an endgame that would involve a possible depression and eventual default and devaluation.

That speculation sounds a lot like what I was writing in Endgame and Code Red. While I see a little bit different outcome than Kevin does (in terms of what a default might look like), I think he has properly highlighted the concerns we should all have.

Forced out of their mysterious anonymity and highly technical orientation, central banks have been dramatically thrust into the limelight as they have become single-handedly responsible for the fate of the global economy. Responding to one emergency after the other, they have set aside their conventional approaches and instead evolved into serial policy experimenters.

Often, and very counter-intuitively for such tradition-obsessed institutions, they have been forced to make things up on the spot. Repeatedly, they have been compelled to resort to untested policy instruments. And, with their expectations for better outcomes often disappointed, many have felt (and still feel) the need to venture ever deeper into unknown and unfamiliar policy terrains and roles.

For those accustomed to the conventional operation of economies and financial systems, all this constitutes nothing less than an unthinkable transfiguration for central banks. Yet the structural breaks have not stopped there.

What central banks have been experiencing is part of a significantly broader change whose effects will be felt by all of us, our children, and, most likely, their children, too. It is a change that speaks to much bigger and consequential evolutions in the global economy, in the functioning of markets, and in the financial landscape. And the implications go well beyond economics and finance, extending also to national politics, regional and global negotiations, and geopolitics.

Understanding the unplanned and, for them and many others, uncomfortable conversion of central banks from largely invisible institutions to the only policy game in town, provides us with a unique perspective on the much larger changes impacting our world. It speaks to the how, why, and so what by:

It is a phenomenon that is being felt at multiple levels. And, so far, all this is just the beginning. In the years to come, this extremely fluid world we live in is likely to pull us further out of our comfort zones; and it will challenge us to respond accordingly. And we shouldn’t just wait for governments to make things better. Unless we understand the nature of the disruptive forces, including tipping points and T-junctions, we will likely fall short in our reaction functions. And the more that happens, the greater the likelihood we could lose control of an orderly economic, financial, and political destiny — both for our generation and for future ones.

To keep this introduction from getting overly long, I’m going to go ahead and hit the send button rather than adding my usual personal comments. Have a great week, and I think you will enjoy this weekend’s letter. It is guaranteed to make you think and is probably a little controversial as well. Let’s just say that it’s an open letter about economic policy to a potential future president.

Your continuing to be concerned about central bank policy analyst,

Given Japan's massive debt and demographic headwinds, the oncoming recession may trigger an endgame that would involve a possible depression, and eventual default and devaluation. 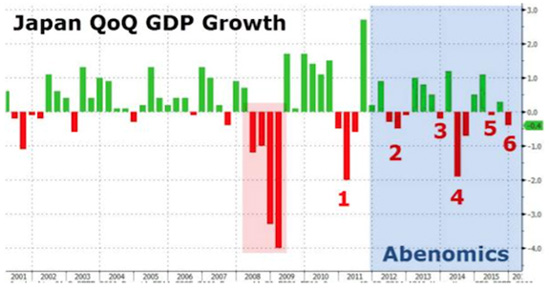 For some time, now many analysts have been focused on at least three major threats to the global economy: 1) the risk of a hard landing and currency devaluation in China; 2) the chance that Italy's failing banks and weakening economy will trigger the next round of the European financial crisis; and 3) the potential for a major credit crisis and trade collapse in emerging markets, as commodities continue their collapse and the dollar holds strong. There are, of course, other threats to the global economy as well, including one that should be getting more media coverage than it has: the chance that "Abenomics" fails and Japan finally gets to its endgame. Since the BOJ shifted unexpectedly to NIRP in late January, signs have started to appear that not only is NIRP failing to deliver on its promised improvements so far, but the opposite has transpired instead. 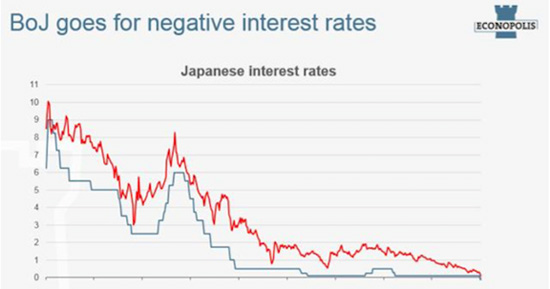 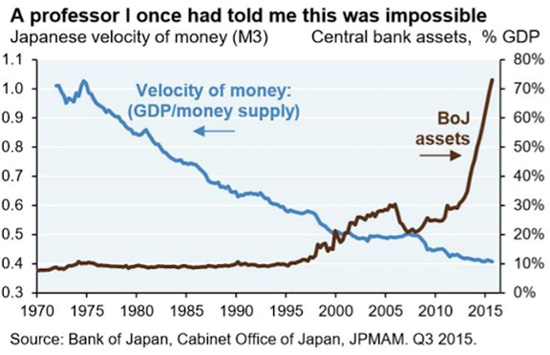 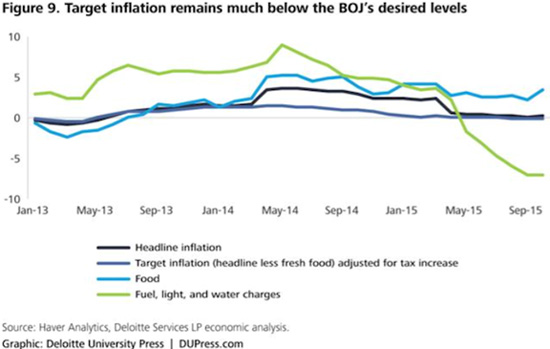 It was already evident that there were problems with Abenomics even before the NIRP decision. For example, the velocity of money has continued to fall, inflation has stayed stubbornly low or negative, household incomes were declining rather than rising, household spending declined sharply as the tax increases from Abenomics kicked in, and as a result, consumer confidence in Japan has been negative for years on end. 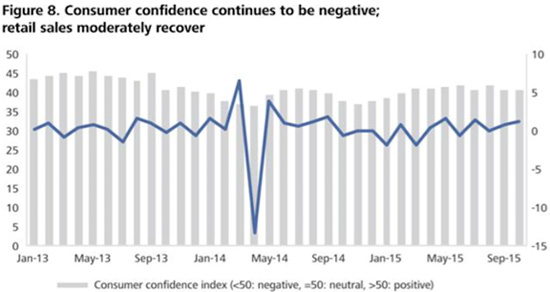 The yen initially fell dramatically under Abenomics, but has made little or no progress towards a lower valuation in the last 18 months or so. The yen was supposed to weaken even more under NIRP, but has instead paradoxically strengthened, at least in the short run. 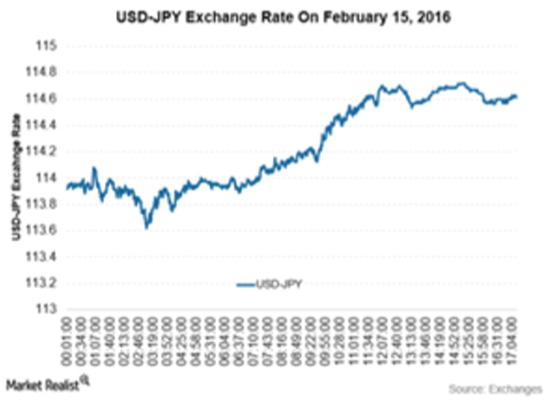 Japanese banks sold off massively in response to the decision on NIRP. Even the newly minted Japan Post Bank, which just had its IPO six months ago, plummeted over 20% below its IPO price, according to Gillian Tett of the Financial Times. The JGB yield is now negative out to 10-year maturities. 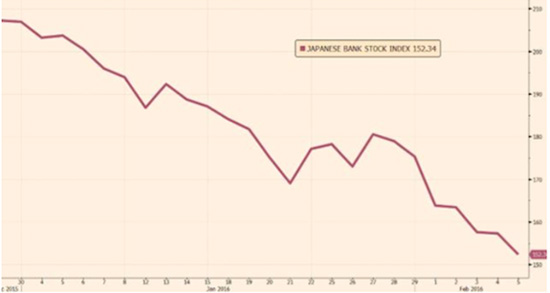 Once again, Japanese bonds have defied the short-sellers and produced a capital gain for holders. Indeed, as renowned perma bear Albert Edwards of SocGen pointed out recently, for Japanese investors, the total return on the JGB 30-year bond has beaten that from the MSCI Global Equity Index over the last 15 years.

Demand for cash in Japan, always relatively high, has increased since the NIRP decision, according to Naohiko Baba, Tomohiro Ota, and Yuriko Tanaka at Goldman Sachs. They note that demand for cash is now very sensitive to interest rates, even to the point that cash and deposits are nearly perfect substitutes. Since deposit rates are so low now, there is little penalty or downside in holding cash. Not coincidentally, sales of household safes for storing (hoarding) cash have soared in Japan since the NIRP decision. 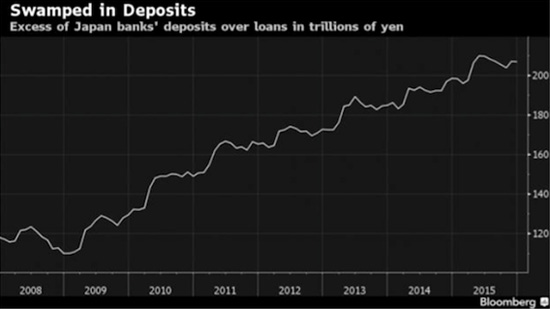 Hoarding is about the worst consumer outcome one can imagine, relative to the ultimate success or failure of Abenomics. Of course, years of market underperformance, deflation, and ZIRP have convinced Japanese consumers (the famous mythical investor "Mrs. Watanabe") to preserve cash assets and avoid stocks. Clearly, the BOJ's recent NIRP decision has backfired with the already fearful average Japanese consumer. The number of banknotes in circulation in Japan is extremely high relative to GDP and to other national economies, such as those of the USA, Switzerland, the eurozone, Denmark, and Sweden. This is in part due to a Japanese cultural preference for cash, and in part due to the long-term decline in deposit rates. Note that all of these, except the USA, already have NIRP in place, in some cases for years now. 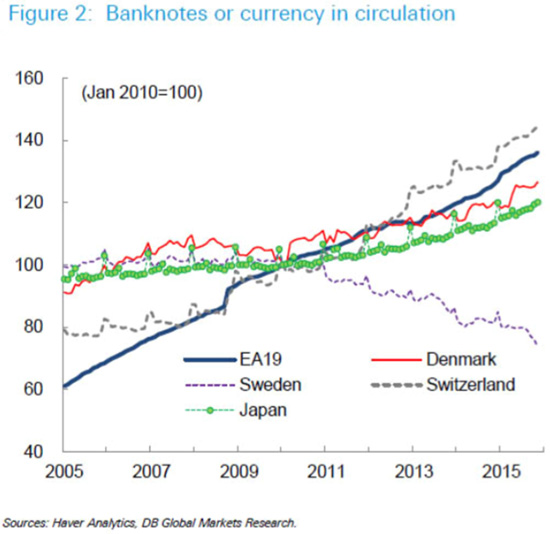 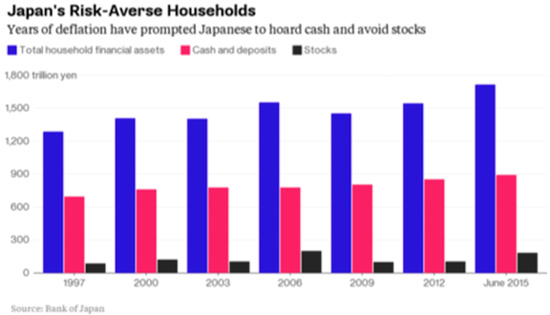 As I have said elsewhere, the debt-deflation cycle in Japan has resisted Keynesian and monetary stimulus, including extreme measures like QQE and ZIRP, for years. Japan is again entering recession, deflation has again reared its head, and trade has given up its early gains under Abenomics and is now in serious decline again. Virtually every aspect of Abenomics is now in failure mode, and since the reform part of the package has never been enacted, it is unlikely that the government can regroup in a meaningful way under present conditions. 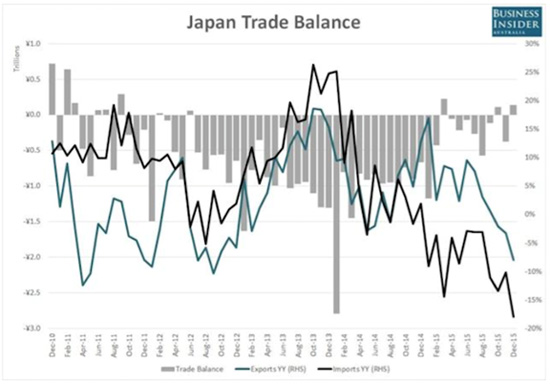 Years of stubborn adherence to theory has scared the populace into a semi-permanent skepticism and deep fear about what is coming. The government, despite its good intentions, has failed to sell the deal. Now, the Japanese government faces a thoroughly discouraged and mistrusting consumer, who is hoarding cash in the same way that many people did during the Great Depression. A deflationary death spiral may be on the way. The Japanese corporate sector has not responded to calls from the government to increase wages, but it has been willing to exploit cheap money for some malinvestment games, like share buyback programs. 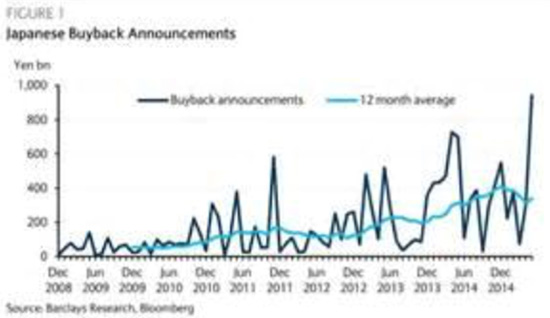 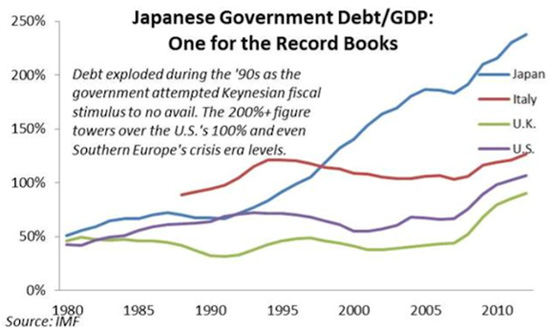 I believe the failure of NIRP is going to provide that metaphorical windshield in the next two years or less, as Japan at last faces its endgame. I make this somewhat bold prediction based on the fact that the country is already monetizing the majority of their deficit, has more income from debt than they do from tax receipts, has already conducted the biggest QQE stimulus on the planet by far, and will face far worse trouble as the recession takes root. Something like this was predicted years ago by Mauldin and his co-author Jonathan Tepper (see their book Endgame, 2011, John Wiley & Sons, New York, 318p). Those who think Japanese stocks (EWJ, DXJ, JOF) look cheap right now should bear in mind that the macro picture is about to turn as ugly as it ever gets. In fact, in my opinion, Japan Inc. is the biggest short ever, just as hedge fund manager Kyle Bass said it would be. And if you are looking for something that could finally trigger a US recession, assuming we are not already in one by then, I think an event like this would easily qualify. 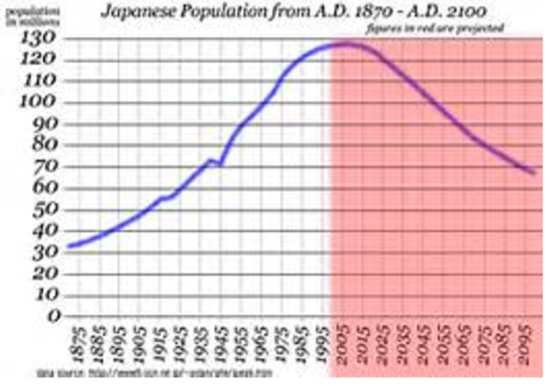