While it is summer in the Northern Hemisphere, it is winter "down under." Today we turn our attention to Australia. In Endgame, Jonathan Tepper and I devoted a full chapter to talking about the problems we saw looming in Australia, and for that we have taken some heat! What's not to like about the Land of Oz? In our view, it might be the bubbles that are building. I asked Jonathan to update us on Australia, and in today's Outside the Box he gives us an in-depth look. Let me quote from a point near the end, in case you might decide to look just at the summary: 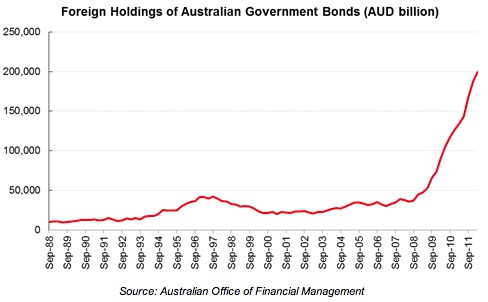 "Although this may sound high, government debt to GDP in Australia is low, at 30% (although is up from 16% in 2008). This low ratio is a result of running a budget surplus for most of the last 15 years. But, even though the situation looks good optically, the fact of the matter is Australia would have to backstop its banks in the event of a crisis, and this low number masks the real debt burden. Two countries that also had low debt burdens before banking crises were Spain and Ireland. They've both required bailouts, so Australian politicians and economists should not be complacent about their public debt levels."

Tonight I get to have dinner with good friends Neil Howe and David Tice. It is always a fascinating conversation with these guys around. But for now, down under we go.

Your trying to catch up with his shadow analyst,