There is a paradox when it comes to perceptions about Afghanistan. No one would disagree that after 15 years the Afghan state built by the West remains ineffective. Yet, no one is willing to acknowledge that if present trends continue the logical outcome will be regime collapse.

Kabul is unable to thwart a growing jihadist insurgency dominated by the Taliban. It also is unable to prevent the Islamic State from expanding its footprint in the country. Worse is that increased factional infighting is gutting the Afghan political system from the inside.

In the past two weeks, two top American security officials have traveled to Afghanistan. The first to visit was National Security Adviser H.R. McMaster on April 16. A week later, Defense Secretary James Mattis arrived in the Afghan capital on an unannounced visit. These trips came on the heels of a Massive Ordnance Air Blast bomb that was dropped on an Islamic State facility in eastern Afghanistan on April 13.

The developments come as the administration of US President Donald Trump is engaged in a bottom-up review of US military commitment… not just in Afghanistan but across the globe.

Afghanistan is a special case. It is the longest running war in American history. The US currently has almost 10,000 troops there, operating in a supportive role to Afghan National Security Forces (ANSF).

The ANSF have primary responsibility for combat operations. However, they have demonstrated an inability to deal with the Taliban insurgency. In the past three years, the ANSF have also faced a growing IS presence in the country. The Taliban remain the dominant jihadist force and have expanded their presence across the country. They now reach into areas in the north such as Badakhshan province, where they couldn’t previously penetrate even during the regime’s pre-9/11 heyday. 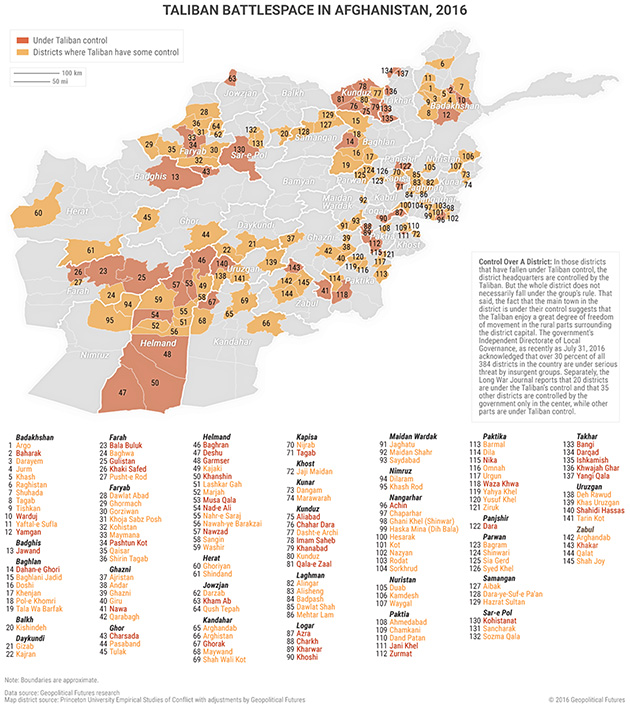 The US cannot continue to lose troops in a war that cannot be won. Washington might consider staying in the hope that its deployment would give enough time for Afghan security forces to come up to speed. But that outcome is becoming all the more elusive.

Not only are Afghan forces losing ground to jihadist insurgents, but they also suffer from a huge intelligence problem. The Taliban have penetrated the Afghan forces’ ranks. This is obvious from the many attacks that have taken place over the years due to security breaches. On April 21, Taliban attackers wearing military uniforms with bona fide identification and using military vehicles were able to enter a key army base in the northern Balkh province, killing at least 150 soldiers in the compound.

Despite losing two central leaders since 2013, the Taliban’s war-making capabilities have not been dented. In fact, the Taliban insurgency continues to grow. The April 21 attack led to the resignations of the defense minister and the army chief.

President Ashraf Ghani has since appointed replacements. But such moves are political in nature and have happened many times before. They are unlikely to lead to changes in the structural reality that the Afghan forces have never been well equipped to deal with the insurgency. The problem is not simply weak security forces. The malaise runs much deeper. The fact is that the political system never really took hold and is now unraveling.

There was a glimmer of hope during the 2014 presidential race when the successor to former President Hamid Karzai was elected. Karzai had been at the helm since the founding of the post-Taliban state in 2002. During the campaign, various candidates—including Ghani—reached across factional lines to pick running mates and contest the vote.

The election, though, was marred by allegations of fraud when Ghani appeared to have won. His key rival, Abdullah Abdullah refused to accept the outcome. At that point, then-US Secretary of State John Kerry was forced to put together a rushed power-sharing arrangement in which Ghani became president and Abdullah was given the bizarre title of chief executive officer.

That arrangement is still in place even though its expiration date has passed. The acrimony between the two sides has only increased.

In addition, regional warlords such as Atta Muhammad Noor from the Balkh area, ethnic Uzbek leader Abdul Rashid Dostum (who is technically still Ghani’s vice president), and Ismail Khan from the western Herat region are also making their moves against the government. Meanwhile, Karzai has assumed a hardline nationalist approach and has been hugely critical of the United States.

Those serving in the Afghan National Army, the Afghan National Police, and the National Directorate of Security (the intelligence service) see the country’s political system in tatters. At the same time, they are targeted by a ferocious insurgency that is gaining steam across the country. This does not bode well for morale.

The security forces’ confidence in the regime is declining. In many ways, that is apparent due to the inability of security personnel to perform. While we are not looking at this process in linear terms, this downward trend cannot be stopped.

Such situations lead to a growing number of retreats from battlefields, desertions from the ranks, defections to the insurgency, and the rise of militias led by warlords. The Afghan state that the West built to replace the Taliban emirate cannot endure under such circumstances.

While no one is willing to officially admit it in Washington, the US political and military leadership is not oblivious to the writing on the wall. There is nothing that the US can do to turn things around.

Limits of US Power

If there were a solution, it would have been implemented long ago. We would not be in the 17th year of US military deployment in the country. American military power has limits. Washington can take down regimes, but it does not possess the power to rebuild a nation or pacify a country.

It would not be surprising if the US under the Trump administration decided to cut its losses and pull out as it did in Vietnam. At some point, the government in Kabul would collapse, and what would be left is civil war. And that would be a continuation of Afghanistan’s history over the last four decades… with a new chapter.