How Are You Going to Keep Them Down on the Farm?
A College Degree Is Not Enough
Boomers Are Breaking the Deal
Two Workers for Every Social Security Recipient
Carlsbad, Palo Alto, Chicago, and Atlanta

There is something missing from this thing we are calling a recovery. For most in the US it does not feel like a recovery, and for good reason: the jobs aren’t there. But for some groups it is a recovery, and more. And that reveals an even bigger problem. Today, in a summer-shortened Thoughts from the Frontline, we look at the trends in employment as well as take note of a signpost we passed on the way to finding out that we can’t pay for all the future entitlements we have been promised. It’s a short letter but hopefully thought-provoking. At the end, I note a webinar and a few speeches I’ll be giving in the near future.

How Are You Going to Keep Them Down on the Farm?

Last spring, I mentioned I was working on a book on employment with Bill Dunkelberg, the Chief Economist for the National Federation of Independent Businesses. We were hoping to get it out by this fall. In the process of researching the topic, I began to see some new patterns in the employment trends that suggest we may be going through a generational transformation, led by both demographics and technology. And while it is ultimately positive, the transition will be harder on some groups than others. In the next few months we will take some time to explore these new trends, but let me quickly lay out a few areas for discussion.

First, we may be going through a technological shift in employment not unlike that in the Industrial Revolution. My discussions recently with Dr. Woody Brock give us some insight. In 1850 the largest group of workers in the US were on farms. By 1900 the largest group was domestic workers. (Data suggest that Great Britain had twice as many domestic workers per household as the US in 1900, and Germany some 50% more.)

“The number of people in paid domestic work increased dramatically throughout the late 19th century in most European countries. The United States experienced a similar situation, which continued into the early 1900s and was largely due to the growing number of middle- and upper-class families that wanted and could afford household help. The arrival of a great many unskilled immigrants who could find no other form of employment contributed this growth.” (Britannica online)

By 1870, one in five Chicago households employed domestic workers, who accounted for 60 percent of the city's wage-earning women. Over the next half century, domestic service represented the leading occupation of women in Chicago and the nation.

What caused the shift from farming? It was partly technology-driven. Farming became far more productive with the introduction and improvement of the McCormick reaper, new plough designs, etc., along with the spread of railroads to bring the increased bounty to cities quickly and cheaply.

As the prices of agricultural goods dropped, smaller farms became less profitable and labor moved from the country to the city. Men generally became laborers, and women migrated to domestic work. In 1900, there were few labor-saving devices. Food had to be prepared from scratch daily. Doing the cooking, cleaning, laundry, sewing, child care, etc. made for a very full day. The growing middle class in Europe and the US employed domestic help.

A College Degree Is Not Enough

A person with a college education clearly has an advantage over those with only a high school diploma or less, but it is no guarantee of security. The Georgetown Center on Education and the Workforce published a study last week highlighting the problems. 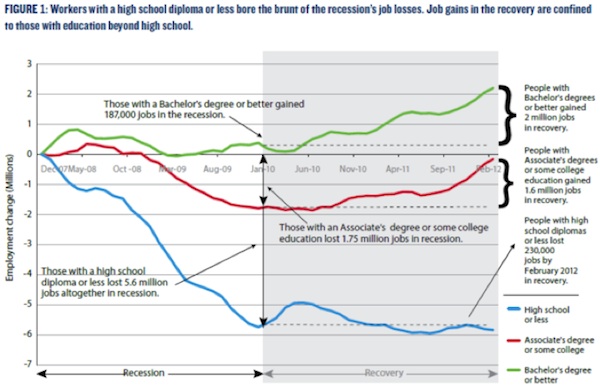 But that graph only tells part of the story. “As the Washington Post's Dylan Matthews has pointed out, the Georgetown report misleadingly sandwiches together plain-old bachelor's degree holders with workers who have a master's, doctorate, or professional degree. And according to data Matthews cites from the Economic Policy Institute, between 2007 and 2011, 98.3 percent of the job gains in that combined group went to the advanced degree holders. These days, it seems we're really in a grad school economy.” (The Atlantic) 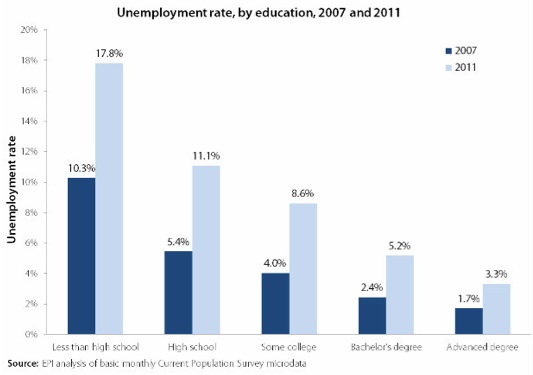 What we see is that a college degree is simply not the ticket it was when I was young. In today’s (Saturday) New York Times, they quote the Associated Press:

“About 1.5 million, or 53.6 percent, of bachelor’s degree-holders under the age of 25 last year were jobless or underemployed, the highest share in at least 11 years. In 2000, the share was at a low of 41 percent, before the dot-com bust erased job gains for college graduates in the telecommunications and IT fields.

“Broken down by occupation, young college graduates were heavily represented in jobs that require a high school diploma or less.

“In the last year, they were more likely to be employed as waiters, waitresses, bartenders and food-service helpers than as engineers, physicists, chemists and mathematicians combined (100,000 versus 90,000). There were more working in office-related jobs such as receptionist or payroll clerk than in all computer professional jobs (163,000 versus 100,000). More also were employed as cashiers, retail clerks and customer representatives than engineers (125,000 versus 80,000).

“According to government projections released last month, only three of the 30 occupations with the largest projected number of job openings by 2020 will require a bachelor’s degree or higher to fill the position — teachers, college professors and accountants. Most job openings are in professions such as retail sales, fast food and truck driving, jobs which aren’t easily replaced by computers.”

Boomers Are Breaking the Deal

I was talking with my youngest son, Trey, yesterday. I gave him my “old” car last year, which now has about 90,000 miles on it. He said he needs to have his spark system replaced. That launched me onto a nostalgic trip, telling him about how we used to replace spark plugs when I was a kid. I explained what a gapping tool was and then went on to detail the rest of the topic. After about five minutes, he remarked that it must have been expensive to have this done. “No,” I said, “we learned to do it ourselves. Everyone could. It was just part of the ritual of getting a car and growing up. Your grandpa helped me the first few times, and then I was on my own.”

Today, I could no more help Trey learn how to replace whatever they have in his car that is an ignition system, assuming I could even find it, than I could figure out how to fix my computer.

When I was young, a car with 90,000 miles on it was getting quite old, and things had to be constantly fixed or replaced. Today, 90,000 miles is just getting started. Cars don’t wear out like they used to.

And apparently the same can be said for the Baby Boomer generation. In the past, as you approached 65 you began to think about retiring. Today, not as many people are ready to “hang up their spurs.” 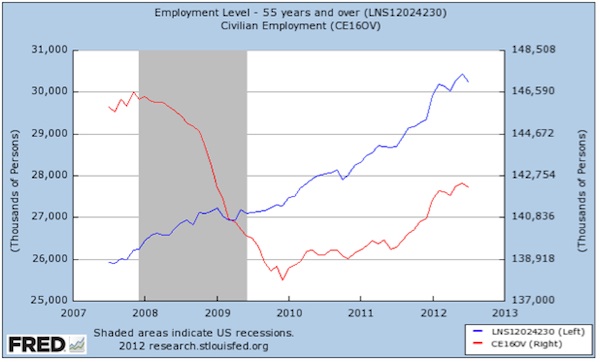 Since the end of the recession, the number of jobs has grown by less than 3 million, all of which have been gained by those in the 55 year and older category! And then some: Boomers have taken “market share” from those who are younger.

The “deal” with previous older generations was that they would retire and move on, making way for the next generation. Boomers are breaking that deal. Not only are we working longer, but we intend to keep on working as long as we jolly well feel like it, and then live on to a ripe old age and collect all those retirement benefits. I will be 63 in a month or so and have no intention of slowing down. And few of my peers are thinking of what retirement looks like, either. 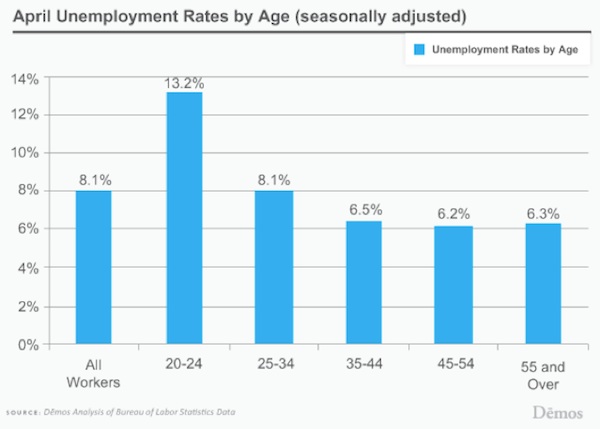 While the unemployment rate is fairly low and even for those 35 and older, younger workers are suffering more, and that partially explains the underemployment noted above. As I remember, when I was in my early 20s, you took the job you could get and then looked around for something better. But the bills got paid.

Just as employment went from the farm to the city, it now seems to be undergoing a new transition. I told my kids they needed to get a college education. As it turns out, I misled them. While a college education is important, they also now need a skill that an employer wants; a degree is not enough. And that is one of the reasons why Boomers, who have had the time to develop the skills, are taking job-market share.

We will go into all this deeper in later letters; but before we close, let me briefly note that Mish Shedlock pointed out in his gonzo blog a few weeks ago that:

Think about that a minute. There are now half as many people getting some kind of Social Security benefit as there are workers in private employment paying into Social Security. And the trend is clearly advancing. This cannot be sustained. And solving the Social Security problem is the “easy” part of the budget debate. Health care is far more difficult.

We read that one in eight families is now getting food stamps and that over 50% of US families get some form of government check each month, while the percentage of workers in the private workforce is shrinking. There is a limit to how much you can take from out of the private sector and still have a growing sector to take something from. But that is a topic for a later letter.

I will be doing an inaugural “Fireside Chat” with Barry Ritholtz on Tuesday, September 11 at 1 PM Eastern. This webinar will be hosted by my friends at Altegris Investments and will be available to accredited investors and financial professionals. If you have already registered with the Mauldin Circle (and are in the US), you will shortly be receiving an invitation to attend. If you have not, I invite you to go to www.mauldincircle.com and register today, so you can hear Barry and me discuss the latest news and, of course, touch on the election and what it means for investors.

I will be in Chicago on September 19, presenting at the RDA Financial Network Investor Forum, from 6:00 to 7:30 PM. The Forum will be held at the Chicago Marriott Oak Brook. This event is sponsored by Steve Blumenthal and my friends at CMG. (And congratulations, Steve, on your marriage last month!) If you would like to attend please email Linda Cianci at Linda@cmgwealth.com.

I will be speaking at the Casey Investment Summit in Carlsbad, California on September 7-9 and then in Palo Alto Sept. 12-13, at an investment conference again sponsored by Altegris Investments.

It is time to hit the send button. I am a little under the weather tonight, but deadlines are deadlines, so I write on. But I do see a lazy weekend in front of me, with friends, good food, and great conversation. And I hope you’re enjoying your summer, too!

Your not ready for summer to be over analyst,