Even in August, while nearly all of Europe is on vacation, we find that economies don't get to take vacation. Europe will come back from its holiday and find that nothing has improved and some things have gotten worse. Specifically, Germany looks to be rolling over into recession. In this week's Outside the Box, Charles Gave of GaveKal looks at Deutschland and notes that while it might be able to handle a mild recession, problems will be that much worse in the rest of Europe, which needs a robust German consumer. This letter will print long due to a number of charts.

"While Europe's biggest economy should be able to endure this loss of altitude, the reverberation across Europe will be significant. The absence of exchange rate volatility over the last 15 years has allowed economies such as Italy and France to escape depression-type conditions, which might otherwise have occurred given their economic underpinnings.

"Now, however, there can be no escaping the fact that reduced German imports must cause a decline in French and Italian exports. This will likely be a shock for those who expect the German juggernaut to drag the southern economies back to growth. To put it bluntly, Germany will very shortly be subtracting from growth in the rest of Europe."

Charles is one of the founders of GaveKal (along with his son Louis and Anatole Kaletsky). GaveKal is one of the world's leading independent providers of global investment research. It also advises several funds, with combined assets of more than US$1.2 bn. With eight partners and 45 employees, GaveKal has its headquarters in Hong Kong and offices in the US, Europe, and China.

I am back from a needed time off and feel ready to get back into the harness. So, without further ado, let's look at what Charles has to say.

Your wondering how David Copperfield does it analyst,

Is Germany Entering a Recession?

The western world's post-2007 economic horror show has already been lumped into the simplified moniker "Great Recession". In fact, the last five years have seen a series of distinct economic cycles that started with the precipitous global contraction induced by Lehman Brothers' failure.

Subsequently, a series of "second wave" recessions have hit Europe; these contractions started at the periphery with Greece and Ireland, moved to Portugal, Italy and Spain, touched France and are now heading for the core of industrial Europe – mighty Germany. Such an outcome would kill any hopes of Europe's biggest economy dragging the rest to safety. So the central question for every Europe-focused investor is: will Germany also enter a recession? And if the answer is yes, what will be the broader impact on the region's incredibly fragile economies?

Let's start with a simplified definition of a recession which we identify as a period when both industrial production (smoothed) and GDP experience annualized declines.

Since 1993, Germany has experienced four such recessions and in each case the IFO Business Expectations Index fell by six points or more in the prior 12 months. The lead time before a recession started has been about six months. Consequently, we can draw two clear conclusions:

1. A recession may have started already in Germany, since industrial production has registered a YoY decline, while, at the last reading, annualized GDP growth was hovering at about 1%.

2. The recession could be pronounced since the momentum of the IFO index seems to be deteriorating, falling again below -5. Put simply, the fact that the improvement of spring 2012 has fizzled suggests that economic activity in Germany will probably be lower six months hence. And this could result in GDP readings going negative by 4Q2012. Ergo, Germany would be in recession. 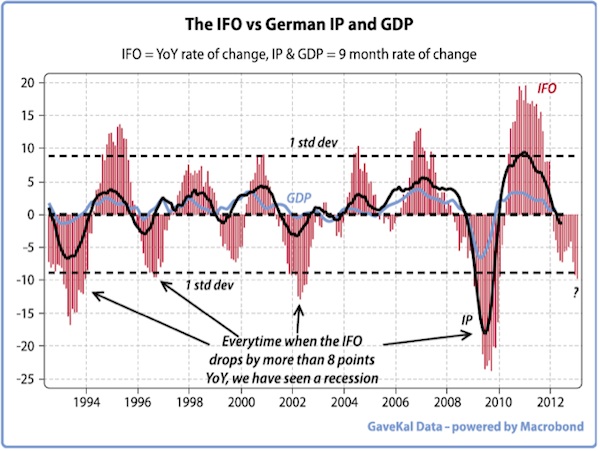 Moreover, three of our preferred leading indicators (German IFO Business Expectations Index, OECD leading indicator for Germany and the Gavekal indicator of economically sensitive prices) are all turning down. The advantage of the GaveKal measure is that it leads the other two by about two months, although corroboration is needed, as it produces more false signals. Hence, in this paper we will stick with the IFO as it is widely available and does not come out of our own bratwurst factory. 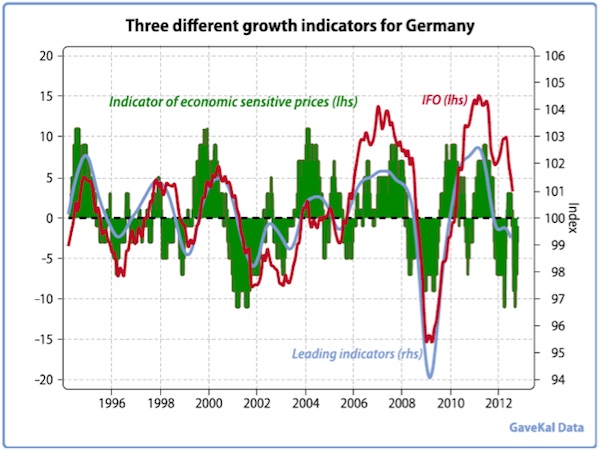 Having established that Germany's economy is in slow-down mode, the next point to test is which sectors will bear the brunt of the adjustment.

Germany is a major player in the intensely competitive machine tools and capital equipment market. While competitive dynamics mean the industry is in a constant process of upgrading and modernization, it still conforms to a fairly predictable cyclical pattern tied to the IFO index (there are notable exceptions such as 1999). Consequently, we would expect that gross capital formation will shortly be subtracting from GDP growth (see chart on next page).

Germany is an export power house in a euroland region which is tipping into recession. Experience shows that when this happens the effect on German exports (in constant prices) is to generate annualized declines (notable exceptions to this rule were 1993 and 2003). Current data shows a particularly tight relationship between German exports and the IFO index with the implication that exports will shortly start to experience annualized declines (see chart on next page). 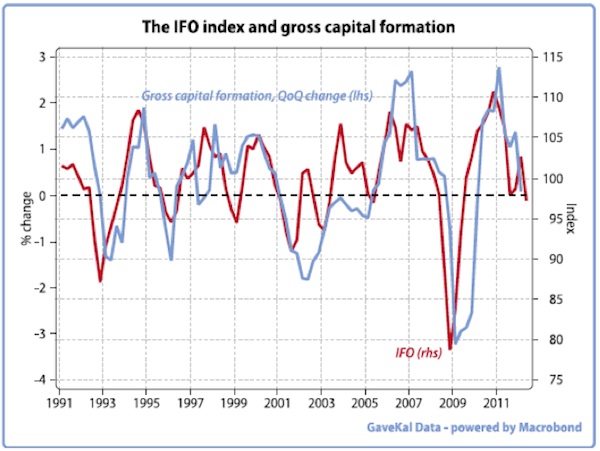 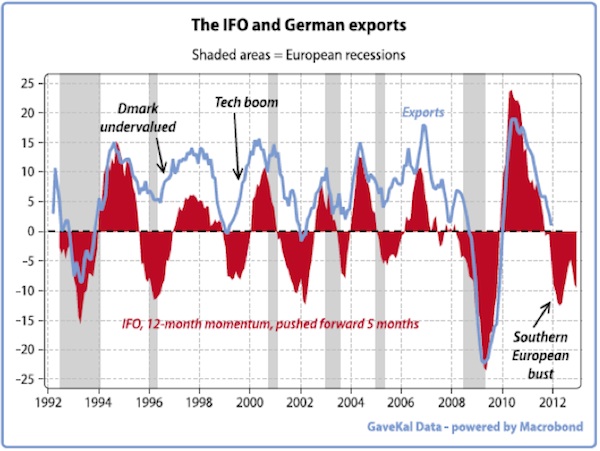 But to get the full picture of foreign trade, imports must be factored into the equation. Germany, as we all know has a huge trade surplus and it is notable that imports and exports have been growing roughly at the same rate (see chart on next page). Hence, it could be assumed that an economic contraction would prompt a matching decline in imports, leaving net exports unchanged. The problem is that imports are coming off a lower base, so their reduction is unlikely to fully offset the export decline. The conclusion must be that foreign trade's contribution to GDP in the quarters to come will be negative. 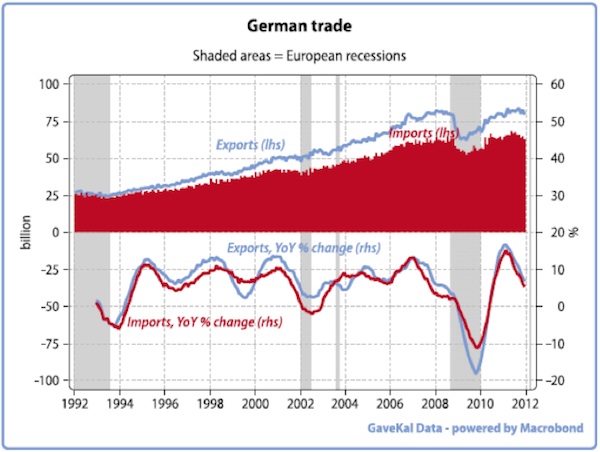 Since German government spending is likely to stay flat at best, the last potential prop for the Teutonic economy is domestic consumption. Unfortunately the ever rational German consumer is not one for credit card binges when chill winds are blowing through the factory heartland. Indeed, German consumers tend to be deeply pro cyclical and usually hunker down during recessionary periods. Only when the economy is clearly back in recovery mode do they tend to start spending in earnest. 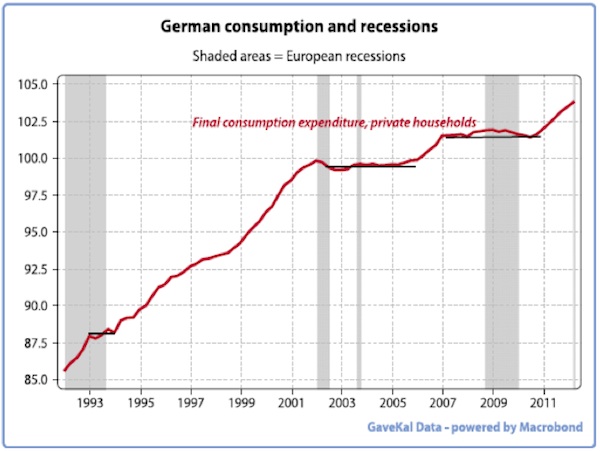 In summary, Germany is likely to experience declines in capital spending and net exports, while government spending and private consumption should remain stable. Hence, the analysis points toward a mild German recession as the most likely outcome.

While Europe's biggest economy should be able to endure this loss of altitude, the reverberation across Europe will be significant. The absence of exchange rate volatility over the last 15 years has allowed economies such as Italy and France to escape depression-type conditions, which might otherwise have occurred given their economic underpinnings.

Now, however, there can be no escaping the fact that reduced German imports must cause a decline in French and Italian exports. This will likely be a shock for those who expect the German juggernaut to drag the southern economies back to growth. To put it bluntly, Germany will very shortly be subtracting from growth in the rest of Europe.

And since the French and Italian economies are NOT competitive versus their German rival (see chart on next page), the concern is that a retrenching German consumer will have an especially big impact on these countries' exporters. It is always the least efficient, marginal producers that are first to lose market share. 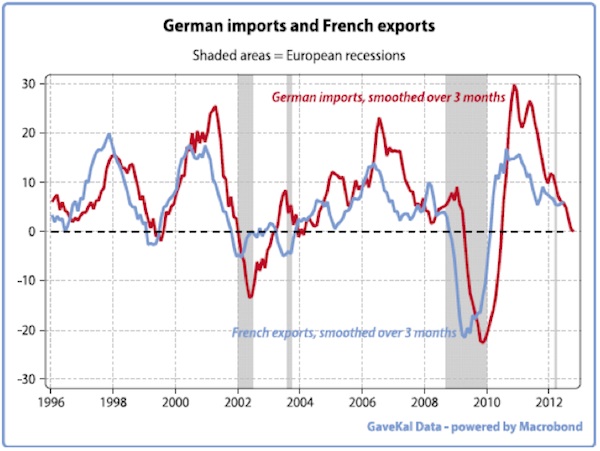 In light of this analysis, we can envisage two likely scenarios

1. Miraculously, some kind of solution is found for the euro, supply side measures are embraced by France, Spain and Italy, and Germany suffers a "small" recession. Under this scenario, the euroland markets are a buy, given they tend to be priced on the cheap side.

2. No miracles materialize and the debt trap already visible in Spain and Italy moves to France. Fairly shortly, all the southern economies enter a "secondary depression."

From such a situation there is a high probability of Germany entering a far more serious downturn. Under this scenario, the sequence of resulting events would likely cause the Eurozone to break apart. 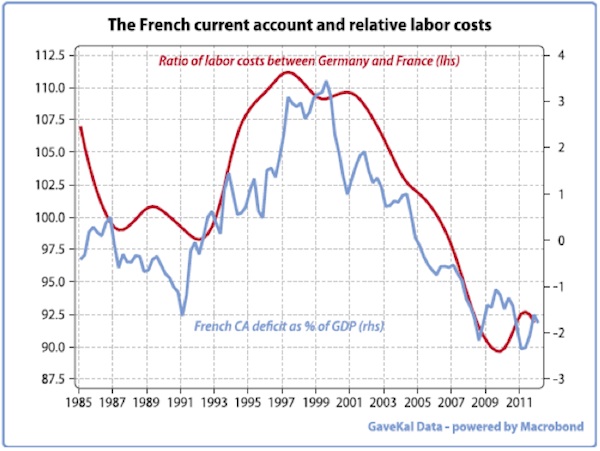 Given these uncertainties, it would be bold to buy massively into euroland. That said, attractive valuations mean that one should be ready to pounce as soon as the fundamentals start improving. In facing this decision tree the IFO index is a useful tool for estimating when to reenter the German stock market. A reasonably good rule of thumb is to buy the French or German stock market only if the IFO index is up over the previous three months (non shaded periods in the chart below). 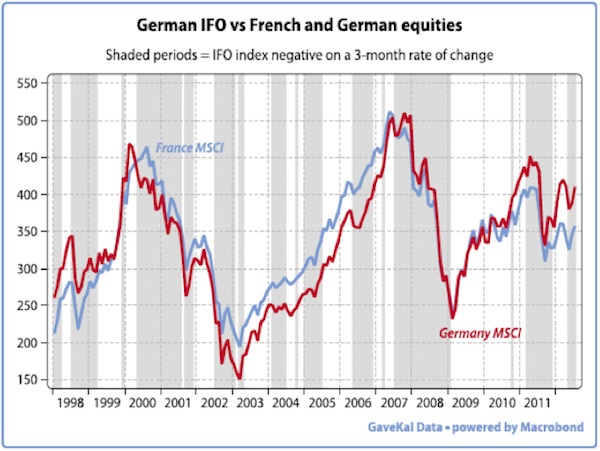 For the time being, the three month rate of change of the German IFO Index is still negative and so is our GaveKal growth indicator. Hence, on the basis that it is probably better to be safe than sorry, investors should, for now, resist the urge to buy back into euroland stock markets (select European export champions would remain an exception to this view).