As long-time readers know, I get a large volume of research sent my way. I can't get to all of it every week, but I really do try. And today's Outside the Box, from a new (to me) source, hooked me from the first few paragraphs.

Correlation is not causation, as we all know. That brings us to the Fed, where many market observers are seeing causation when there might be other reasons for stock market movements. What if the victory lap Bernanke has taken due to stock market results is perhaps a little too early or out of place entirely? And what might that potentially say about future market performance and correlations?

Denis Ouellet wrote today's Outside the Box and graciously gave me permission to use it. I asked him a little about who he is. Turns out he lives in Montreal (but winters in Florida), is almost 60, and has retired after nearly 35 years in the investment business as an analyst and head of research for a brokerage company, an equity manager for various investment organizations (pension, mutual, and hedge funds], head of global equity investments at a major pension fund, and chairman of the equity investment committee of a major pension and mutual fund investment organization.  Like me, he travels around the world and has lots of kids (just 5 in his case). His blog is New$ to Use.

I leave on Wednesday for Atlanta and will eventually end up in New York on Sunday to start a 36-hour marathon of meetings and interviews, plus a speech or two. On Tuesday morning I am with Tom Keene on Bloomberg at 7-7:30 AM.

What If the Fed Has It All Wrong?

This is the 4th major intervention from the Fed since 2009, each one apparently inflating asset prices without having a definitive impact on the economy other than, most importantly, preventing a lethal debt-deflation spiral. 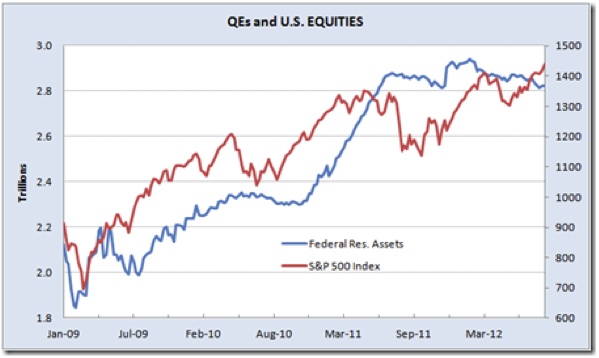 The chart above is used extensively to illustrate the close relationship between QEs and equity prices. Hence investors' Pavlovian reaction to last week's FOMC announcement of an open-ended and unlimited money printing program. Virtually every asset class rose, giving credence to Ben Bernanke's attempt to create a stimulating wealth effect.

What if the Fed has it all wrong?

Correlation does not imply causation. Could there be another reason for the spectacular rise in equity prices since 2009? Let's try earnings, just in case that intuitive, time-tested, relationship might still be working: 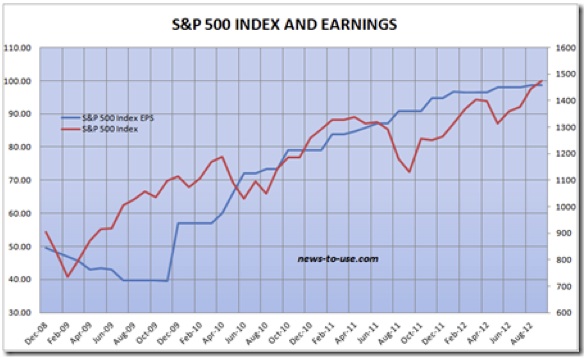 If there were a direct link between QEs and corporate profits, it should be apparent in S&P 500 company revenues. Yet, Index sales have only grown 16.5% during the last 3.5 years, nothing close to the 60% jump in Fed assets. Given that the Fed is now totally focused on growing employment, I doubt that it would take credit for the spectacular jump in profit margins since 2009, since most of it emanated from cost cutting (mostly labor) and rising productivity. 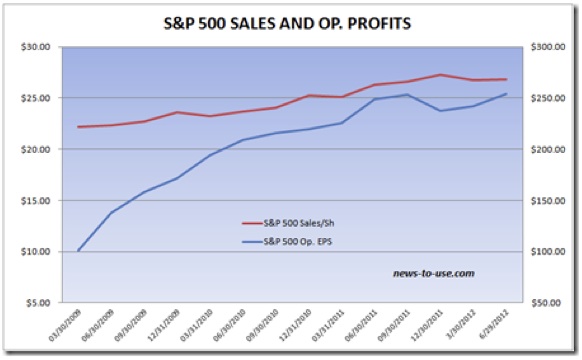 Some recent facts point to weaker earnings ahead:

•  Quarterly sales and earnings have peaked in the last 9-12 months.

•  Corporate profit margins are at an all-time high. 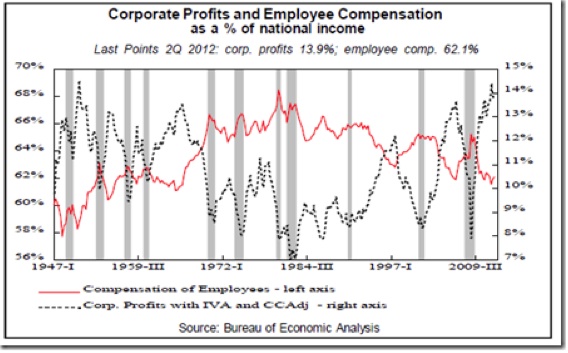 It is therefore dangerous to assume that margins will expand any further. From now on, corporations need to increase sales in order to grow their earnings. Unfortunately, demand is waning.

American wages, currently at a 50-year low as a percentage of GDP, are rising very slowly, so slowly that it is hampering consumer spending and the overall economy. At the time of previous QEs, also designed to create a wealth effect, wages were rising at a much faster clip than today. Furthermore, real wages were rising during 2009 and 2010, partly offsetting slow employment growth. 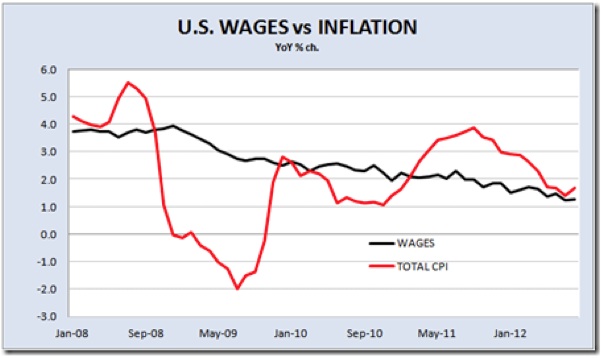 Today, employment growth remains below 1.5% YoY, a rate insufficient to reduce unemployment. Nominal wages are growing 1.2% while inflation is 1.7% and threatens to accelerate, in large part due to the impact that the Fed's actions are having on commodity prices, particularly oil prices. 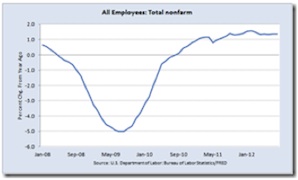 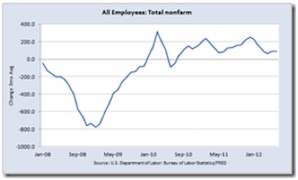 The US economy got lucky in 2011, when gasoline prices dropped 18% to $3.20/gal. just in time for the back-to-school season and Christmas. It's luck extended into 2012, when the U.S. experienced an extraordinarily warm winter. Unless something else extraordinary happens soon (SPR releases?), the exact opposite will happen to oil prices. Gasoline has jumped 16% since July, adding to the squeeze just as we enter the most important shopping period of the year (chart below from gasbuddy.com). 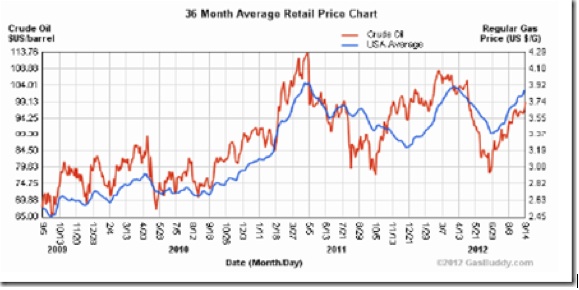 The following chart plots the Fed's printing with commodity prices. Unlike the relationship with equity prices, it is difficult to find anything other than excess financial liquidity to explain the spectacular rise in commodity prices. Considering how world economies have been doing lately, why is it that commodity prices have not declined significantly? 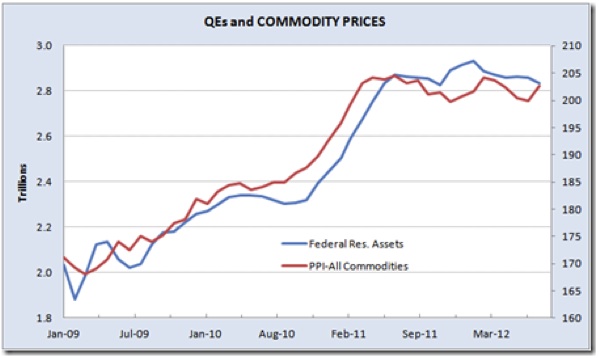 The Fed's balance sheet is set to grow another $800 billion by the end of 2013, the same amount it has increased since 2009, a period during which commodity prices jumped 20%.

The Fed wants to grow employment faster, but jobs don't grow out of thin air. Corporations create jobs when they have the means, they see a need, and there is visibility to commit. Needless to say, the last two conditions are far from being met these days. The Fed can't offset negative US politics, the European mess, nor the Chinese slowdown.

Bringing mortgage rates down further might help the slowly recovering housing sector and restart construction employment, but low wages and rising inflation remain a problem that might be perversely aggravated by the very actions the Fed is taking.

Wages are not about to accelerate, but inflation and taxation are problematic. If the American consumer can't spend, who will provide the needed spark?

Higher P/E Ratios to the Rescue?

Earnings have stalled, corporations are cutting guidance, and analysts are busy revising their estimates downward. Q3'12 estimates have been cut 8% since March and are now below Q2 earnings, which are themselves coming in much lower than originally expected. Q3 earnings are now seen down YoY.

If so, trailing 12-month EPS peaked last quarter and will decline in Q3. The earnings tailwind has disappeared.

There have been eight periods since 1935 when equities have risen in the face of declining earnings (see Banking [Betting] On Bankers?). In all cases, inflation declined along with earnings.

The dependable Rule of 20 says that "Fair trailing P/E = 20 minus inflation." Lower inflation begets higher P/Es. A fair P/E is thus 18.3 at the current 1.7% inflation level, 23% above the current 14.8x P/E, pointing to 1800 as fair value on the S&P 500, based on trailing EPS of $98.69. If this undervaluation is narrowed by the liquidity pumped out by the Fed, could it create enough wealth effect to push US consumers into a spending spree, in spite of negative real labor income growth?

The problem with Bernanke's wealth effect thesis lies with the new reality in America. Income and assets have lately been so significantly redistributed that only a tiny few actually feel a wealth effect from rising equity prices. Here are some sad facts: 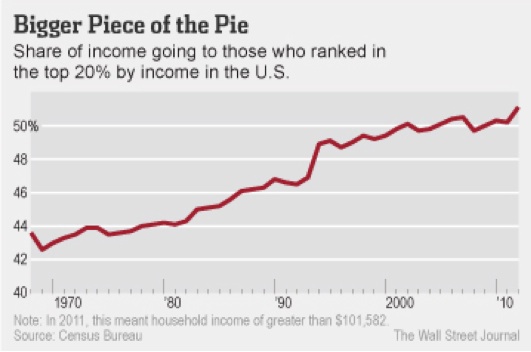 •  Stock holdings have obviously declined since 2007: 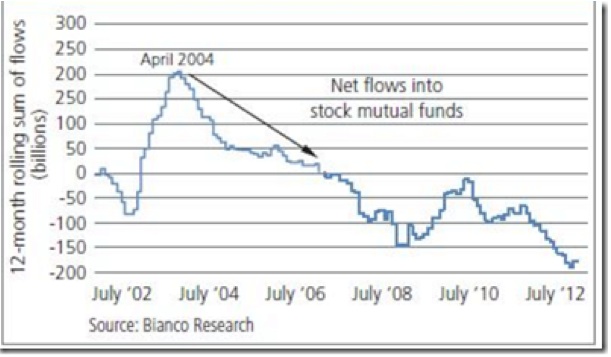 •  Total residential mortgage debt has only declined 7.5% since 2008. Some 1.5 million homes are in foreclosure, but 10.8 million homes remain in negative equity.

The "wealthy few" may feel wealthier if stocks advance, but they could nevertheless have much less after-tax income to spend when politicians finally address the looming fiscal cliff nestled within the rapidly growing mountain of debt.

Keep in mind that it is these wealthy people who run American corporations, keeping them lean and mean and flush with cash. They remember how profits literally disappeared in 18 months in 2007-08. They remember how financial markets totally froze in 2008. They see the humongous budget deficits and the debt piling on, and the not-so-distant day of reckoning. They realize that all the Qes in the world can't offset inept and irresponsible politicians on either side of the Atlantic. Yet, they are the ones targeted by the so-called wealth effect!

Call that pushing on a golden string.

Meanwhile, the less affluent, the other 80% – some 250 million people – are little concerned by an eventual wealth effect but highly, directly, and immediately  impacted by the side effects of all these QEs, namely rising commodity prices and near-zero interest rates. Consider that:

•  11.2% of the labor force is out of work, if we include the 7 million people no longer seeking employment. This number (over 17 million workers) is unchanged since 2009.

•  Most of the 43.5 million American retirees must cope with nominal interest rates, near zero through 2015, when inflation is around 2.0%.

Call that pushing on a chafed string.

Now that US and European central banks have delivered the financial heroin needed to compensate for inept and irresponsible politicians, should we jump back in equities?

The risk here is that, much like businesspeople, investors may remain cautious, given the numerous and highly complex difficulties the US and the world are facing. They will also consider that, at the time of previous QE program launches, equity markets were similarly undervalued, but many economic trends were then more positive:

•  Earnings were in a strong uptrend on rising margins.

•  Oil prices were much lower.

•  Europe was not in recession. 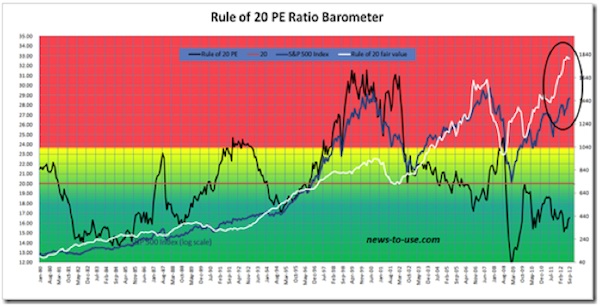 That assumes that inflation stays constant at 1.7% YoY. However, gasoline prices are +7% YoY in September, after rising 1.8% in August.. If they remain unchanged until year-end, gas prices will be +18% YoY. Not only would that considerably disrupt Christmas sales, it would also help raise inflation (gasoline is 5.5% of the CPI, energy is 9.7%). If inflation rises to 2.0%, a 10% undervaluation would get the S&P 500 Index to 1565, a mere 6% above current levels.

If the Fed has it all wrong, simply pushing on golden or chafed strings, and the only effect of QE3 is to boost inflation, only God(ot) knows what will happen.

While the Fed waits for the wealth effect to take effect, the European Central Bank is also waiting for its own Godot, following Draghi's magic with the ECB rules and regulations. Super Mario's "whatever it takes" promise is powerful but not without pitfalls:

•  When, if ever, will the eurozone achieve the necessary banking and fiscal unions?

•  Will Spain and Italy surrender before it is too late?

•  Will ever more austerity finally work?

•  When will the debt spiral stop?

•  How much longer will the Germans put up with the situation, accepting that the ECB ruins its balance sheet by taking on unlimited risk on behalf of the German taxpayers, risking their fiscal sovereignty to save the "reckless Southerners"?

•  How much longer will the hordes of unemployed young Europeans put up with the situation?

Central bankers have indeed delivered. In truth however, they are merely experimenting with totally unproven ways and means, hoping to gain enough time until more responsible politicians emerge. Given the significant risks still facing us until Godot shows up, investors should await more evidence that either earnings will resume their uptrend or some kind of miracle will happen.

Equity holdings should be trimmed to conservative levels. Sustainable income should be favored. Cash earns essentially nothing but is safe for now. Gold remains attractive for many, many obvious reasons.