Catalonia is vying to become Europe’s newest nation-state, but this is a battle Catalonia ultimately can’t win. On Oct. 27, Catalan lawmakers voted to declare independence—barely. Only 51.8% of members in the Catalan parliament supported the declaration. That means even Catalans themselves are divided over whether Catalonia should secede from Spain.

Spain has threatened to do whatever is necessary to maintain the rule of law in Catalonia, and it has both the will and the means to follow through on that threat. Catalonia also has very little international support it can depend on. Even so, the Catalan revolt of 2017 will have ramifications in Spain and in Europe that will be felt for generations to come.

For many observers outside of Europe, the Catalan issue came out of left field. Sure, the Catalan government said it would hold an independence referendum, but it held a similar referendum in 2014 and nothing came of that. Surely, all the Catalan government wanted was a bargaining chip it could use in its negotiations with the Spanish government over taxes and other issues related to the region’s political autonomy. Catalonia has more to gain economically by remaining a part of Spain, so why would it want to embark on the arduous and violent process that usually accompanies declarations of independence?

But no one should be surprised that Catalan independence has become a major issue—it has been for many centuries now. It is a product of Spain’s geography and Catalonia’s unique history. The geography of Spain is immensely diverse. The northwest is rainy and faces the Atlantic. The center has historically been dry and poor. The northeast—where Catalonia is located—is fertile and faces the Mediterranean. The south has its own unique climate and spent many centuries under Muslim rule. These realities helped create unique cultures and political economies that have proven remarkably resilient over centuries, despite best efforts to subsume them under Spanish nationhood. 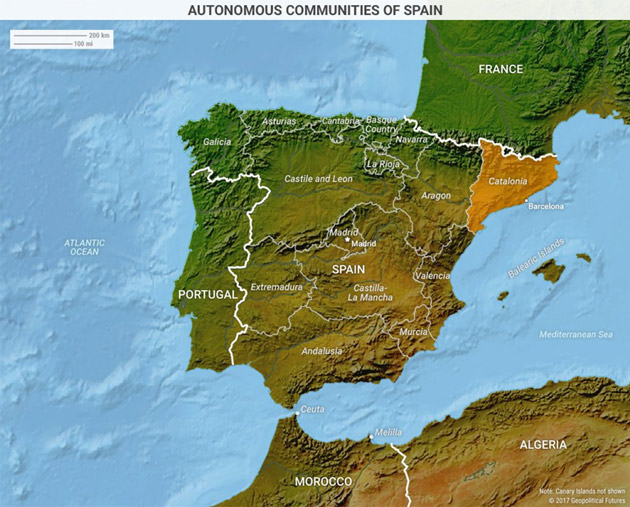 The Catalan declaration also came out of Catalonia’s history. There has been a uniquely Catalan political consciousness since the Middle Ages. When Ferdinand II of Aragon and Isabella of Castile married, their rule was not absolute. It was a bargain between the monarchs and the regions comprising their dominions, many with their own constitutions. Taxes might well have flowed to the crown, but the crown in turn respected the autonomy of its regional subjects. The players often changed, but “Spain” was always a grand bargain between disparate regions and distinct peoples, not a coherent national entity.

The grand bargain did not always hold, especially in Catalonia. Catalonia has periodically sued for greater autonomy and even independence. In the 17th century, for instance, the Spanish monarchy tried to extract more money out of Catalonia because Castile was carrying too great a share of the tax burden and because the Spanish crown needed money to pay for its wars. The result was the Catalan revolt of 1640–1652. In 1932, Catalonia once more tried to seize greater autonomy, only to be crushed by Spanish dictator Francisco Franco after the Spanish Civil War of 1936–1939. The 1978 Spanish constitution once again returned autonomy to Catalonia, recognizing that Spain could not hope to claim legitimacy among all the people it aimed to rule if it did not also respect the diversity of those very people in the first place.

At first, this seemed to work sufficiently well. But over time, the same issues that for centuries had divided Catalonia from the rest of the country began to crop up again. Even as Spain’s economy grew after 1978, Catalonia remained significantly richer than the rest of the country. Today, the region’s gross domestic product accounts for 20% of Spain’s GDP, and its GDP per capita is higher than the EU-27 average. The 2008 financial crisis hit Spain particularly hard. Youth unemployment spiked to over 50% in 2014 and remains around 40% today. Overall unemployment has been declining but is still over 16%. Catalonia wants more control over its economy and less of its tax revenue going to the central government. And it began reinstituting cultural markers such as teaching the Catalan language in schools. The grand bargain that was reached in 1978 has failed to hold up in a post-2008 world.

This explains why Spain has reacted with such force to the Catalan regional government’s moves—even though only 42% of Catalans showed up for the vote, not exactly a ringing endorsement for the separatists. Catalonia is just one of 19 autonomous communities in Spain. Basque Country, with its own language and unique culture, has also been vying for independence, and as recently as the 1990s, Basque separatists carried out terrorist attacks in Spain in support of their cause. If Spain does not crush Catalonia’s independence movement now, it could open a Pandora’s box, with other regions demanding more autonomy or even separation, and Spain can’t allow this to happen. Madrid, therefore, needs to assert direct control over Catalonia; anything less would give the appearance of Spain abdicating its responsibility to its people and its constitution.

Both sides have been hurling accusations of illegal conduct at each other. The Spanish constitution is silent on the issue of independence referendums, but the Spanish government and Spain’s Constitutional Court view the Catalan regional government’s activities as illegal. The Catalan government viewed the violent Spanish response to the vote as illegal. The Catalan government also thinks what it is doing is in keeping with the spirit of the European Union, founded as it was on the idea of national self-determination. The situation has progressed to the point that the legalities and illegalities are irrelevant. The rule of law exists only in a political community in which all, or at least the vast majority, accept it. When there is a fundamental disagreement about what the law is and who gets to enforce it, the stability that law imposes breaks down, and life goes back to being nasty, brutish, and short, with victories determined not by persuasive argument but by monopoly of force.

This is where things get complicated for the European Union. On the one hand, the EU remains steadfastly in support of its member state, Spain. But Spain will now have to use force to maintain its writ in Catalonia. That will put the EU in a lose-lose situation: It can either support a member state using force to quell a political rebellion that seeks the very thing the EU was designed to protect—national self-determination—or it can support the right to self-rule for the people of Catalonia but, in so doing, completely undermine the position of the Spanish government.

Eighteenth-century Irish statesman Edmund Burke famously said that Spain is “a great whale stranded on the shores of Europe”—as if, at the end of the day, there was something fundamentally un-European about Spain. That may have been true back then, but the 2017 Catalan revolt shows that Burke’s view of Spain no longer holds. Spain will now be a model for Europe. Catalonia is the first major secessionist movement to take concrete steps toward achieving independence in post-Maastricht Western Europe, but it won’t be the last. How Spain and the EU respond to Catalonia will set the tone for how the EU will respond to separatist or autonomy movements in places like Scotland, northern Italy, or other regions with dormant nationalism that may bubble to the surface.

2017 will be the year that the EU supports a government in putting down a movement for national self-determination on the European continent. Most, if not all, EU countries will support the use of force this time, since no country wants its own territorial integrity challenged. But condoning the use of force in this context takes the EU to a dangerous place. The EU was built around economic prosperity and was designed to ensure peace for Europe’s nations. If the EU can guarantee neither of those things, it will become irrelevant or unrecognizable. Slowly but surely, Europe is returning to history—and the suppression of Catalonia is a recurring chapter in that history.