Before we begin with this week’s installment of This Week in Geopolitics, I want to draw your attention to the 2018 Strategic Investment Conference. Last year at the SIC, I said the United States would likely launch a pre-emptive attack on North Korea. I failed to anticipate the level of opposition from South Korea, which would bear the brunt of the casualties in such an attack. Without South Korea’s support, the US reconsidered its position. No attack came.

Obviously, I would like it if GPF were right about everything. Our track record is pretty good, but in this case, we were wrong. Still, I view this as the reason the SIC is such a valuable conference. The SIC’s greatest asset is how it brings together thinkers with profoundly different viewpoints to discuss the most important issues in the world today—people who aren’t afraid to tell you what they think, or to admit when they were wrong. I’m honored to be speaking once more at the SIC, where the theme for the year ahead is “Crossroads.”

And indeed, the world is at a crossroads. The post-2008 financial crisis “recovery” has not curbed speculation or reduced inequality. It has not halted the rise of political instability in the world’s most important countries. As Europe celebrates what 10 years ago would have been meager growth rates—and as the US celebrates sky-high stock prices one day only to watch them fall the next—the world stands on a precipice where the choices seem to be imminent chaos or delayed crisis.

I hope you will join me at the SIC this year to discuss these important questions with experts from around the world, but if you can’t, Mauldin Economics has made it even easier for you to experience the insights by offering the SIC 2018 Live Stream Virtual Pass, where you can watch all of the action live, and even submit questions to panelists. You can find further information here. I look forward to answering your questions, whether in person or virtually.

Without further ado, let’s get to This Week in Geopolitics.

Over the past year, North Korean state media have repeatedly featured warnings of a potential high-altitude electromagnetic pulse, or EMP, attack against the United States. The North is moving rapidly toward both a high-yield weapon (which is likely needed to pose a major EMP threat to the US) and the ballistic missile capability needed to deliver it. Depending on which group of scientists you believe, the threat of a high-altitude EMP attack can range from an overhyped doomsayer fever dream to a grievously overlooked and near-existential threat to the US. But given the uncertainty around the crisis on the Korean Peninsula, the debate about the severity of the EMP threat is worth examining.

A high-altitude EMP attack would work like this: A nuclear device explodes at high altitude, somewhere between 25 miles (40 kilometers) and 250 miles above the Earth, producing powerful gamma rays that radiate outward. Upon colliding with molecules in the Earth’s atmosphere, the downward-directed gamma rays create a powerful electromagnetic energy field. The EMP doesn’t hurt humans directly, but it makes some electrical devices and attached cables act as antennas, hitting electronic systems with a surge of high-voltage current. 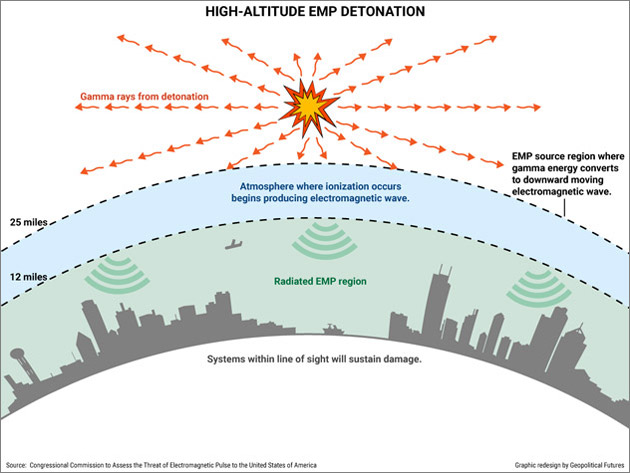 The EMP arrives in three phases—a near-instantaneous, powerful pulse known as E1, a subsequent high-amplitude pulse known as E2, and a slower and lower-amplitude (but still damaging) waveform known as E3. E1 causes most of its damage by inducing voltage in electrical conductors beyond what they can handle. E2 pulses behave similarly to the current produced by a lightning strike, and thus would likely be the least-damaging phase (assuming standard lightning protections haven’t been disabled by E1). E3, which can last from several seconds to several minutes, occurs when the fireball from a large detonation briefly warps the Earth’s magnetic field. Its effects are akin to those of a geomagnetic storm caused by solar flares. It feasts on long electrical conductors, such as power and telecommunications lines, allowing its effects to ripple outward.

The damage that could be done by an EMP is difficult to assess—and thus prone to major disagreement within the scientific and national security communities—in part because it hinges on an array of factors. The first, of course, is the power of the EMP, which depends on things like the size of the blast and the altitude at which it is set off. The power of the EMP can also differ from one part of the globe to another, based on distance from the equator and the strength of the magnetic field of the region below. (Generally, the farther the blast is from the equator, and the stronger the magnetic field, the stronger the pulse.)

One area of debate about the EMP threat is whether a simple fission device with a yield of, say, less than 10 kilotons—the sort of device that would most likely be held by a fledgling nuclear state or non-state actor—would really be powerful enough to cause widespread damage. The power of the first phase of the EMP for a low-yield device is believed to be limited by the narrow range of altitudes at which it can be detonated while still causing significant damage. For example, a 1-kiloton device is believed to be strongest if detonated at around 25 miles above the Earth. If detonated much higher, the electromagnetic pulse would dissipate too much. If detonated much lower, deep inside the Earth’s atmosphere, it wouldn’t produce an EMP of consequence at all. (Any high-altitude EMP attack must be conducted at an altitude of 20 miles or above.)

At 25 miles, the area of the Earth’s surface within line of sight of the blast, and thus theoretically exposed to the E1 pulse, would have a radius of some 440 miles. Skeptics also argue that E1 from a low-yield device (by some estimates anything with a yield less than 100 kilotons) would also weaken considerably toward the periphery of the exposed region, shrinking the potential area of damage further to a 250-mile radius. 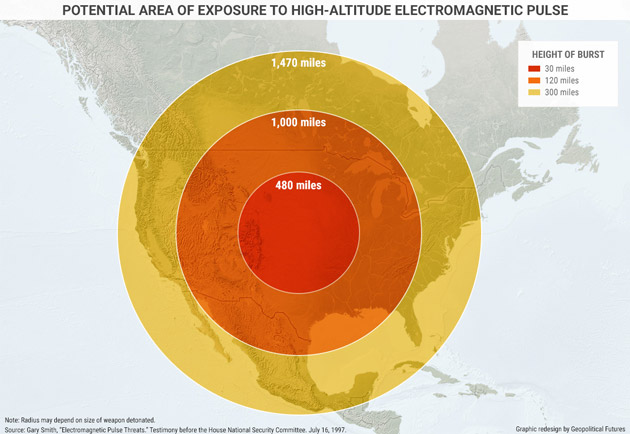 Given all the variables involved in assessing the impact of a high-altitude EMP attack, along with the disagreements within the scientific community and the lack of publicly available information from classified US research into the issue, estimates about the potential damage vary widely and tend to be short on empirical evidence.

The most routinely cited estimates come from a pair of assessments put together by the Congressional EMP Commission in 2004 and 2008. The commission had access to classified research and was allowed to conduct some testing of its own in a laboratory environment. Its findings weren’t optimistic.

According to the 2008 report on critical infrastructure:

The cascading effects from even one or two relatively small weapons exploded in optimum location in space at present would almost certainly shut down an entire interconnected electrical power system, perhaps affecting as much as 70 percent or possibly more of the United States, all in an instant.… Should significant parts of the electrical power infrastructure be lost for any substantial period of time, the Commission believes that the consequences are likely to be catastrophic, and many people may ultimately die for lack of the basic elements necessary to sustain life in dense urban and suburban communities.

The following year, the chairman of the EMP Commission told Congress that the damage in areas within the blast radius would be an order of magnitude worse than what Hurricane Katrina inflicted on the Gulf Coast in 2005—and that a 90% fatality rate nationwide within a year due to starvation and systems breakdown was plausible.

Since then, public officials, including a former CIA director, have routinely given credence to the 90% figure. But experts in the scientific community have dismissed this figure, along with a number of other commission findings, as speculative and/or contingent on factors that are basically impossible to model.

Use It or Lose It

Still, even if the EMP threat is prone to exaggeration, it can’t be dismissed altogether—especially given that North Korea is moving toward the sort of high-yield nuclear weapons that have been most successful at generating damaging EMPs in the past. So it’s worth investigating what is perhaps the pivotal question: In what scenarios would it even make sense for a country like North Korea to resort to a high-altitude EMP attack? To put it bluntly, there aren’t many.

The main hurdle to a high-altitude EMP attack is the same argument against a nuclear attack—the threat of retaliatory annihilation. Even if the North were able to trigger an EMP with a nuclear device far more powerful than anything it’s tested to date (delivered via an intercontinental ballistic missile capable of carrying a heavier warhead than any rocket it’s tested to date), and even if the resulting EMP is as strong and effective as feared in the most extreme scenarios, it would not strip the United States of its ability to strike back. Most critical military equipment is hardened to protect against an EMP, particularly strategic systems.

So, in reality, the choice facing the North would be no different than if it were deciding whether to conduct a direct nuclear strike on the United States. And if the North gets to the point where thermonuclear war is an acceptable risk, it’s hard to see why it would waste its limited arsenal of nuclear warheads on unproven EMPs rather than on trying to incinerate Los Angeles.

At this point, it would make sense for the North to launch a high-altitude EMP attack in only one scenario: if it were faced with a choice to either use it or lose it.

If the North finds itself under attack by the United States and determines that it will soon be denied the chance to master re-entry technology, attempting a high-altitude EMP attack may be one of its few cards left to play. This is because a high-altitude EMP attack does not require sophisticated re-entry or guidance technologies. The device is detonated above the atmosphere, after all. In this way, EMP can serve as a sort of bridge between the North’s status as nuclear aspirant and full nuclear power.

This is why the North has floated the possibility of an EMP attack. It knows that the US knows it still needs time to make its traditional nuclear deterrent credible, and it's looking for ways to stall a US attack until it crosses the Rubicon. An EMP attack may or may not live up to the hype. But the possibility that it could cause serious problems for the US, combined with the possibility that the North will empty its chamber when under attack even if doing so invites massive retaliation, gives the US one more factor to consider before moving forward with the military option.