US Secretary of Defense James Mattis met with defense ministers from other NATO member countries in Brussels on Feb. 15. The meeting was closed to the public, but some of Mattis’s comments were released to the media. “America will meet its responsibilities, but if your nations do not want to see America moderate its commitment to this alliance, each of your capitals needs to show its support for our common defense.” He added, “America cannot care more for your children’s security than you do.”

Tickets are selling fast for Geopolitical Futures’ inaugural conference, The Next 4 Years: The Role of the United States in the World, which takes place April 5 in Washington, DC.

Attendees at this exclusive event will listen to authorities in the fields of geopolitics and defense discuss the geopolitical issues that confront the United States under President Trump, including its unstable relationships with Russia, China, and Europe.

Click this link to find out more and secure your place at the conference.

The Definition of an Alliance 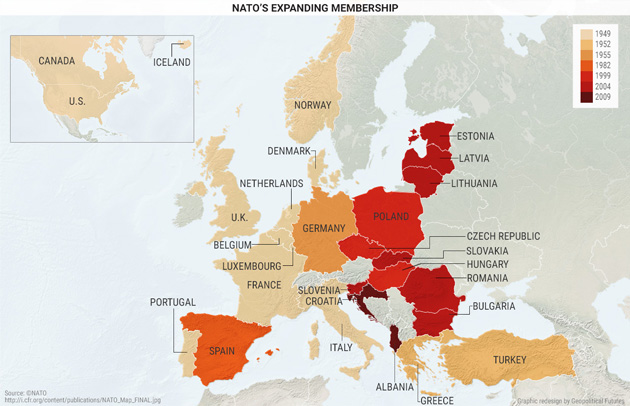 NATO was created to be a defense alliance. Defense requires military forces. Alliance means deploying those forces to protect or support an ally. Alliances usually involve countries with varying power and capabilities, some weak and some strong. This is to be expected. But sharing the burden is also expected in an alliance. Each partner gives what it can for the greater good.

By all these measures, NATO is not currently a coherent alliance. It is instead a collection of states disproportionately dependent on the US for security guarantees. This arrangement is significantly less valuable to the US than an alliance. 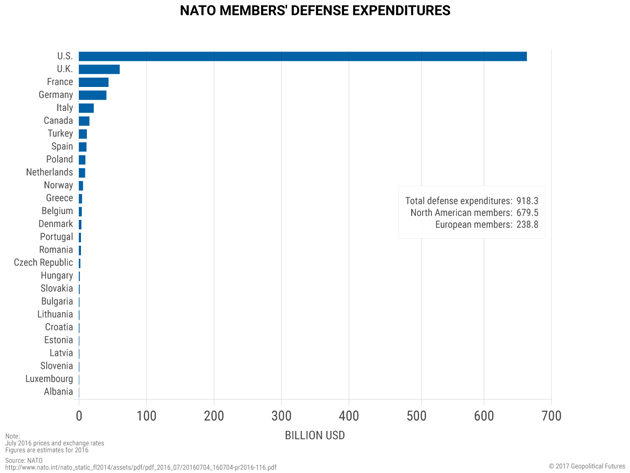 The chart above starts at the simplest level. Not all NATO members spend a similar amount on defense. NATO estimates that alliance members’ defense expenditures totaled $918.3 billion in 2016. More than 70% of that spending came from the United States. The US spends 2.5 times more on defense than all other NATO member states combined.

NATO is not currently a traditional military alliance. It is a list of 27 countries the US has agreed to defend. 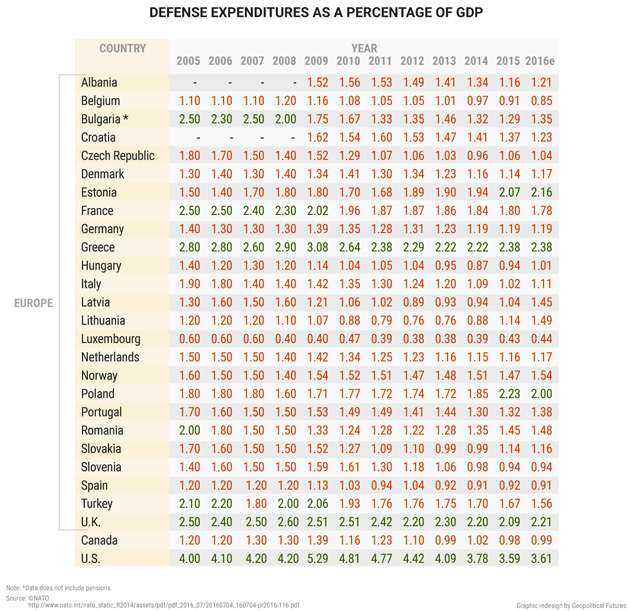 The data in the table above are taken directly from NATO’s own figures and show the problem from a different angle. Defense expenditures as a percentage of each individual ally’s GDP (including the US) have been decreasing steadily. Some claim this decline only began after the 2008 financial crisis. This is not true.

Only eight countries increased spending as a percent of GDP from 2005 to 2008. As the chart above shows, these increases were small. In 2006, NATO states agreed at a summit in Riga that all members should spend 2% of GDP on defense. In that year, six countries met that threshold: Bulgaria, France, Greece, Turkey, the UK, and the US. In 2016, only five countries met this threshold: Estonia, Greece, Poland, the UK, and the US.

In 2014, some NATO countries reaffirmed their commitment to increase spending to requisite levels by 2024. But NATO member states had already agreed to those spending levels in 2006. “Reaffirming a commitment” is code for not having fulfilled a previous promise and insisting this time will be different. Promises lose their worth when they have been broken in the past. A decade is a long enough time to wait for an ally to live up to a promise. And 18 years is an unreasonable amount of time.

The US cannot fight wars and defend NATO’s varied interests with promises. The US cannot honor commitments unconditionally. Its power has limits. The US faces a broad array of challenges in different parts of the world, and this makes having dependable allies a crucial part of US strategy. 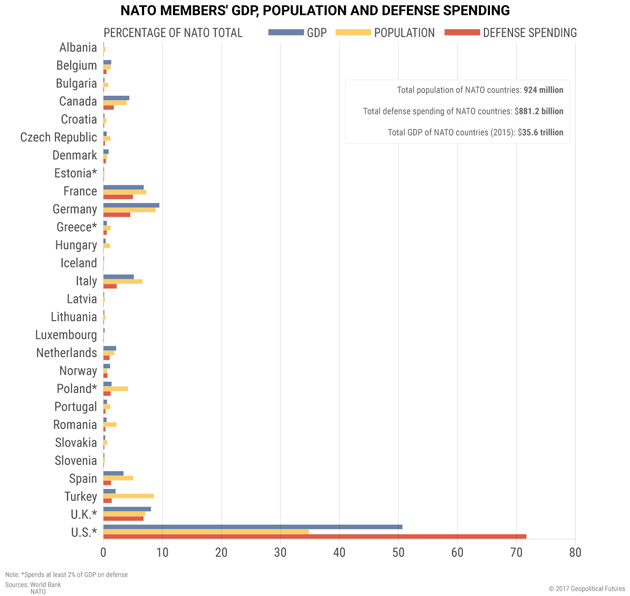 Not all NATO members are created equal. For example, Croatia is never going to spend an equal amount on defense as the United States. But even when factoring in the size of the US, it spends significantly more on defense than other members. As the chart above shows, the US accounts for about 50% of NATO members’ total GDP and 32% of their total population—and yet the US makes up about 72% of defense spending.

There is only one country that spends a proportionate share on defense based on its share of overall GDP and population: the United Kingdom. The US contributes far more than its share. Every other NATO country spends less relative to its economic activity or its population. Western European countries (excluding the UK) account for 31% of NATO members’ GDP and 33%  of their population, and yet they contribute 16%  to NATO members’ total defense spending.

On one hand, this makes sense. Eastern Europe faces more immediate threats than Western Europe. Eastern Europeans still have fresh memories of Soviet domination, which means Russian aggressiveness poses a very real threat there. On the other hand, it demonstrates that some NATO members that can contribute more are not pulling their weight.

After Mattis’s closed-door meeting with defense ministers, NATO Secretary General Jens Stoltenberg said at a press conference, “This is not the US telling Europe to increase defense spending. This is 28 allies, heads of states and governments sitting around the same table in 2014, and looking into each other’s eyes and agreeing that we shall increase defense spending.”

The US has asked for help and hasn’t gotten it. The US is now demanding help. NATO member states face a serious choice over whether to give the US this help. The US wants NATO meetings to be gatherings of officials from 28 allies sitting around a table, each clear-eyed about the alliance’s goals, and bearing a proportional share of the cost of achieving those goals. For the US, that is a measure of success. It is not a description of reality.