Spanish essayist George Santayana once wrote, “Those who cannot remember the past are condemned to repeat it,” but there is a problem with this famous and witty line. Studying history has little practical utility in averting past outcomes. We are doomed to repeat history whether we know it or not.

The value in knowing history is not that one might prevent its recurrence. Its value is that it allows you to identify those things that don’t change and that shape events… no matter the year on the calendar. It is not quite as clever a turn of phrase, but it would be more accurate to say: To predict the future, one must understand the past.

Geopolitical Futures, unsurprisingly, focuses on the future. But part of what gives GPF analysis such insight into the future is its grounding in history. This is not always obvious, as most of our writing stays focused on the future. But today, in This Week in Geopolitics, we thought we might pull back the curtain slightly and showcase four maps that highlight what parts of the world looked like in the past… and that point the way toward what may come in the future.

There are a little over two weeks left until Geopolitical Futures’ inaugural conference, The Next Four Years: The Role of the United States in the World.

And there are just 8 tickets remaining.

That means if you wish to join us for a full day of debate on critical geopolitical issues facing the United States now and in the coming years, there is no time to waste.

A brief reminder of the details. The conference takes place on April 5 at the Army and Navy Club in Washington, DC. As well as learning from panel sessions made up of top-level analysts and strategists, you will have the opportunity to chat with me, Geopolitical Futures analysts, and several of the speakers at breakfast, lunch, and a cocktail reception.

I hope to meet you there. Click here to find out more and get one of the last 8 tickets. 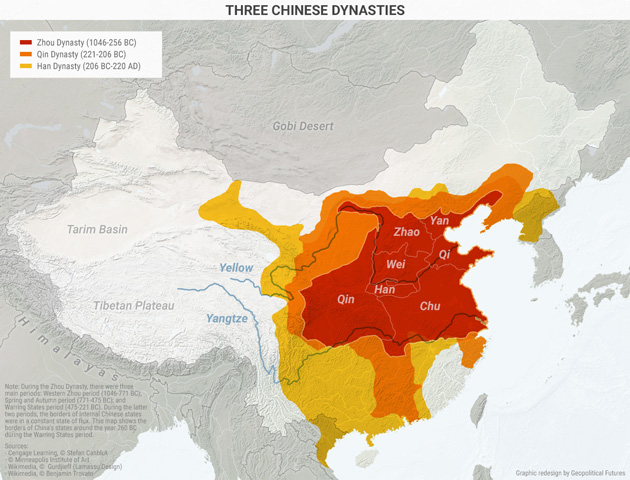 The map above simplifies a great deal of China’s ancient and imperial history. It identifies seven states that fought for control of the historic Chinese heartland during the Warring States period (475–221 BC).

Two observations can be made from this map. First and most important, China has always been a land power. Its control has never extended beyond the mainland in a serious way. Taiwan is the only notable exception—and Sinic civilization only came to Taiwan after the Ming Dynasty (not shown on the map) collapsed in 1644. Some Ming loyalists fled to Taiwan to use it as a base of operations. When GPF talks about China not having a tradition as a maritime power and being confined to the mainland, these facts often are not mentioned in the analysis, but that makes them no less important.

The second observation is that China’s core territory is well defined and has not shifted much over millennia. Today, China controls much of the land in the interior, including the Tibetan Plateau and the Tarim Basin. Mongolia no longer poses a threat, and the northeast is under Beijing’s control. (The Manchu Dynasty, which overthrew the Ming Dynasty in 1644, came from that northeast territory.)

This map also shows that at various points China has even exerted direct control over present-day North Korea. Control over the Yalu River, either directly or through political influence, is not a new geopolitical imperative for China. It has always shaped the behavior of whoever rules China. 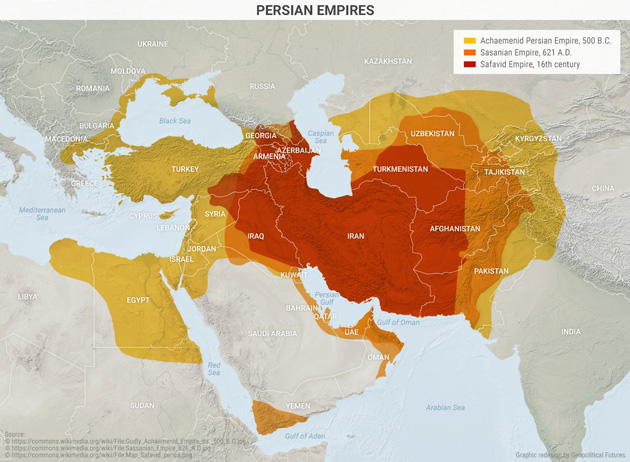 This map shows three different iterations of empires that originated in Persia (present-day Iran). Many fear that Iran wants to establish another Persian empire to echo those of the past, but Iran will not accomplish this goal anytime soon. That’s because the prerequisite for such an empire is a weak entity in Turkey—and as Turkey is increasingly unafraid of showing, it is not a weak entity.

Still, in thinking about what a potential Iranian empire could look like, this map is instructive. The areas that were under Persian rule during all three empires are particularly telling. Persia's mountainous core was the heart of each empire. From there, these empires expanded north and west into Central Asia and parts of Afghanistan and Pakistan, terminating abruptly at the Hindu Kush (an area over which it is extremely difficult to project power). Persia’s presence in the Caucasus was pronounced, but here too, it ran into geographic boundaries it could not overcome. Most relevant for thinking about current Iranian strategy, the map reveals that all Persian empires controlled most of present-day Iraq.

The extent of Persia’s cultural influence in a wide swath of the world often goes unappreciated. Remnants of its imperial glory years are still evident throughout not just the Middle East, but also in the Caucasus, South Asia, and Central Asia. These are diverse areas that are difficult to rule. Even present-day Iran is an extremely diverse country by virtue of an internal geography that lends itself to the development of different languages and cultures.

Looking out from this mountain fortress of varying ethnic groups, Iraq is the most important strategic imperative Iran must address. But Iran’s influence extends outward in multiple directions, and these are all areas where Iran’s power must be continually benchmarked. 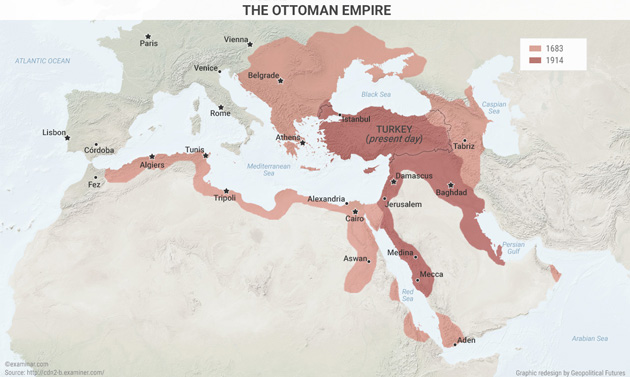 The Persian empires discussed above were large, and at times expanded their power to the coasts of present-day Greece, Bulgaria, Romania, and even Ukraine, Crimea, and Russia. But they did not extend into the rest of Europe. Their power base was in the Middle East, Central Asia, and the Caucasus. This is not true of the Ottoman Empire.

At its height, the Ottoman Empire did not just project power onto the European coast. It ruled lands in the European heartland, and in 1683, it laid siege to Vienna. The Ottomans were eventually beaten back, and over the centuries, their power would decline. But the Ottoman Empire was both a European and a Middle Eastern power. This is crucial to understanding present-day Turkey.

The Persians were a land-based, regional power. The Ottomans were both a land- and sea-based power, and their writ extended across continents. At their core, the Ottomans were a  Mediterranean empire. They controlled many of the major ports and, most importantly, Mediterranean trade routes, which were some of the most vital trade routes in the world in the 15th and 16th centuries. Today, these routes are still important, but not nearly as critical as they were then, and this limits just how strong even a very powerful Turkey could become.

Even so, studying the Ottomans’ history is important because it shows where Turkey is going. The Arab world is in chaos to its south. Russia is weakening. Iran is constrained. The Caucasus is in its usual state of disunity. The Balkans have enjoyed a brief respite of stability that will not hold. North Africa (from Cairo to Algiers) is a basket case from both an economic and security perspective.

Turkey is a very strong country, and it is becoming stronger. Much has been made in the last few weeks about Turkey’s diplomatic clashes with Germany, the Netherlands, and other countries. It is important to think about those developments with the above map in mind. 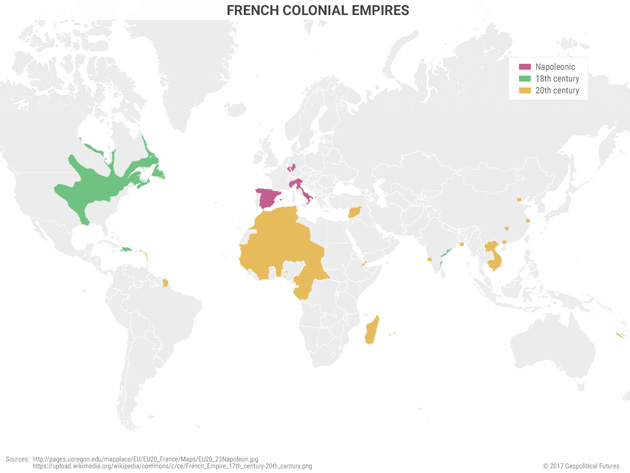 The last map is different than the others. It shows two types of French empires: the Napoleonic Empire (when France dominated the European continent) and France’s various colonial empires. There are no ancient maps here to show because present-day France did not rule over land outside the European continent before the Europeans discovered the Americas. A unique blend of political and technological circumstances allowed France to expand its power far beyond its traditional borders. Today, those circumstances are no longer present, so this map should not be used as an indicator that France will vie for dominance in India, Africa, or North America anytime soon.

Still, this map reveals some basic facts. First, France is a major European power that not long ago dominated the entire continent. But France has fallen a long way from those days. At best, it is now the third most powerful country in Europe, lagging behind Germany and Britain.

France, however, is not destined for insignificance. Its economic stagnation and the drama around its elections have the world’s attention, but as the power structure in Europe is reorganized, France will have a significant role to play. It remains a major regional power on the European continent even if its economy is mired in low growth and its domestic politics are inwardly focused.

Second, because France was such a major imperial power, vestiges of that power remain in unlikely places. More people speak French outside of France than in France (about 36% of French speakers live in France, according to a 2014 report by the International Organisation of La Francophonie). French military forces are combating radical Islamists in various parts of North Africa, and France has committed forces to fighting the Islamic State in the Middle East. Countries like Lebanon and Tunisia retain French political, educational, and socio-economic structures, even though the ties of imperialism have long been severed. France does not exert power over these places anymore—but the echoes of its past power remain.

We began with a pithy quote, so it is appropriate to end with one. Winston Churchill once said, “Study history. In history lie all the secrets of statecraft.” The secret of statecraft is that it is relatively powerless against the broad forces that cause history to repeat itself in successive centuries and even millennia. The first step toward understanding what is possible in the future is to understand what was impossible in the past.