Chinese President Xi Jinping announced last week that he will take command of all of China’s armed forces, including the People’s Liberation Army (PLA). He is already chairman of the Central Military Commission that oversees the army. He is now assuming a more direct role as head of the new Joint Operations Command Center, ostensibly putting him in operational command of the PLA in time of war. In all likelihood, the new title means little in terms of actual command, but it has tremendous political significance. The roots of this change lie in China’s economic crisis, but the official reasons given are not trivial, and we need to start with those to understand what is happening.

The Chinese are reforming their military along American lines. The PLA had been a World War II-type force, heavy on manpower but not evolving technologically. This was particularly true of the ground forces. In addition, hampered by interservice rivalry, the army, navy, and air force did not operate well together. So the Chinese are emulating the United States’ Goldwater-Nichols Act of 1986, which radically changed US military operational principles. It created geographical commands—such as Central Command and Pacific Command—with forces operating under a single regional commander, regardless of service. The services (Army, Navy, and Air Force) lost control of their forces once they were deployed. At that point, their functions were confined to training, procurement, and tactical doctrine. In other words, in the US, the services are in charge of managing resources while the regional commanders fight wars. In World War II, on the other hand, each service fought its own war, with limited coordination and occasionally painful consequences. Goldwater-Nichols was intended to solve that problem, and the Chinese have decided to try to solve it, too.

The air, sea, and ground components of the People’s Liberation Army will now have the job of creating and managing the forces. Five new geographic commands have been created, and each will have a single commander in control of the forces at war. These regional commands will report to the Joint Operations Command Center, which will oversee and control regional warfighting and coordinate regions. While the Central Military Commission oversees the military from a political standpoint, the Joint Operations Command will oversee it operationally. And Xi will control both. 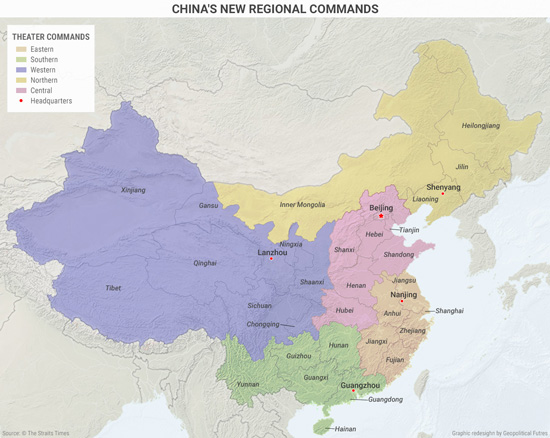 The reforms are logical and in line with the best practices of contemporary warfare. However, the Chinese president’s taking direct operational control of the military is not. A good analogy would be Barack Obama’s declaring himself chairman of the Joint Chiefs of Staff. The US president’s taking operational control of the military, in addition to the political power he has over it, would be odd because it would be inefficient. The president controls the government, but he does not personally run its departments. The president authorizes war, but he does not control its operation. A political leader who decides to micromanage a military while managing the national government usually creates a disaster. (See “The Political Nature of Strong Armies.”)

It is therefore odd that Xi would take on this role. One reason given is that the importance of military reform and the inevitable resistance of the PLA to restructuring make it necessary for Xi to don a camouflage uniform and take direct control of operations. But is the resistance of the military really so great that the president must step into uniform to get it under control? Every military hates reforms imposed by civilians, yet most submit to the civilians without the civilian leader’s having to become the military commander. This is an extreme step to take to reform the military. There is something else going on.

The something else is a regime trying to ensure its own survival. China was founded by Mao Zedong as a moral project: to create a country ruled by communism. After Mao’s death, his project was replaced by another: to modernize the Chinese economy and create prosperity. The Maoist regime was replaced by the current regime in which the leadership rotated in an orderly fashion and government after government oversaw the generation of increasing wealth. Mao justified the regime as a dream (or nightmare, depending on how you viewed Maoism). His successors justified their regime by promising prosperity, and they delivered.

They delivered until they stopped delivering. There is occasional talk that China will somehow return to a period of rapid growth and increasing wealth. But the vast outflow of money (some in the hands of private individuals, some taken from government coffers and informally privatized) is the short explanation for why China has reached a new normal. If the rule is “follow the insiders,” the insiders are saying that getting money out of China is a priority. The story is more complex, of course. If a regime justifies itself by delivering prosperity, and it stops delivering, the regime is in trouble.

China’s problem can no longer be considered primarily economic. That train has left. The economic reality is locked in and will remain in place for a long time. China is now in the throes of a political challenge. The coastal region will be growing at a much slower rate than before, if at all. People who came from the interior for jobs will have to return to the interior. A vast and impoverished region, the interior is the population heartland of China—over 60 percent of China’s population lives there. But the coast is the country’s economic heartland, and that dichotomy defines China’s political problem.

Xi must satisfy both regions, which won’t be easy. The interior wants money transferred to it for jobs, economic development, and ultimately increased consumption. The only place from which to draw this money is the coastal region, which obviously does not want to make the transfer. The coast is economically linked to the United States and Europe, not to the interior. It wants to maintain those links. But the interior is where the majority of Chinese live, and it was the foundation of the Chinese revolution and the regime. Xi is frightened that the interior will destabilize under economic pressure and that he will lose control over the coastal region, as happened in the 19th century.

These are distant fears but not irrational ones. Xi’s mission is to ensure that the Communist Party keeps China under control. His primary challenge is the inequality that the post-Mao economic surge created, not only among classes but also among regions. The Communist Party came to rule China by exploiting that inequality. If the party cannot erase the problem it has created, it must at least try to control it.

The first step toward control was to impose a dictatorship on the country in order to prevent the emergence of any organized resistance. Today, further liberalization is out of the question, and suppressing any elements that demand liberalization is essential.

Alongside this effort is a campaign to assert control over private assets. Such control is essential if money is to be used to quell unhappiness in the interior. The vast anti-corruption purge is designed to achieve this. The campaign is not so much aimed at suppressing corruption, although doing so has its uses. Rather, it is designed to intimidate all those who have accumulated wealth. This class must be brought under the control of the party, rather than being allowed to use its wealth to control the party. The mission set out by Deng Xioping was to “enrich yourself.” Now the fear is that the wealthy have gone too far. The somewhat random and unpredictable purges are intended to frighten the rich. One result is capital flight, and that is a problem. But the goal is to make wealth subordinate to political power, not the other way around. Otherwise, the party becomes fundamentally weak.

Wealth is part of the equation, but in the end the People’s Liberation Army is the key. It is the ultimate guarantor of the regime in two ways. First, it has the power to crush opposition, as it did in Tiananmen Square. Second, its ranks are filled with the children of peasants, who see enlistment as a path to upward mobility. Taken together, its makeup and power can guarantee the communist regime’s survival.

On the other hand, the PLA is also capable of undermining the regime. Its enormous size might enable it to subvert the party’s power throughout the country. In the past, there was a clear alignment between the party and the PLA. Now that bond is less certain. The PLA’s officer corps has gotten deeply involved in enriching themselves. In the past, the PLA was directly involved in PLA-owned enterprises. Those have been reduced, but the PLA leadership is still intertwined with Chinese business, either directly or through relatives. The PLA’s size and influence mean that its officers’ interests are torn between the party and the wealthy now under attack.

However, the PLA’s massive size is currently being reduced, which makes good military sense. It also makes political sense. This allows Xi to eliminate those involved in what is now termed corruption, to confiscate their wealth, and to intimidate others. This purge is similar to those going on in many institutional bureaucracies in China, except that the size and importance of the PLA outstrips all other institutions. A smaller and reconfigured PLA will pose less of a threat to the regime, even as its military efficiency increases.

This transition is dangerous for the party and for Xi. The writing is on the wall for many in the army who have accumulated wealth, but restructuring will take several years. The PLA will have to be tightly controlled. That is why Xi set up a Discipline Inspection Commission in January specifically for the PLA, answerable directly to the Central Military Commission. This is also why Xi has taken direct control of military operations. He or his trusted advisors will have direct access to plans and operations. The PLA will come under Xi’s direct supervision. Any broad conspiracy that includes the PLA will be readily detected. You can’t hide the kinds of troop movements that an existential threat to the regime would require.

The PLA is the center of gravity of the regime, and if Xi loses control of it, he could lose control of everything. Xi would never have appointed himself head of the Joint Operations Command Center if he hadn’t felt the move absolutely necessary. He moved to take control of the PLA’s operations to ensure that he could preserve the regime. He put a very different gloss on the action, positioning it as an expansion of his power… and it was. But it was an expansion compelled by the regime’s insecurity. At first glance, his move should succeed. But there are so many complex and competing interests involved that when Xi pushes on some, others could come loose.