I have talked at length in recent months about the well-proven limitations of Federal Reserve modeling of the economy. (See for instance “Data-Dependent ... on Imaginary Data.”) And come to think of it, I’ve been on their case for years. The Fed’s predictive capacities are demonstrably abysmal. In today’s Outside the Box, Ambrose Evans-Pritchard, the intrepid international business editor of the Daily Telegraph of London, joins the fray.

Ambrose’s criticism of the Fed’s current posture on policy rates and the drawing down of the Fed’s balance sheet center on three areas of concern:

To add to what Ambrose is saying, it is just not the last 90 days that LIBOR has surged. It was only a few years ago that LIBOR was under 0.25%. Today it is 2.3%. That is a 2% jump since the Fed’s tightening cycle began. That increase has raised rates on an enormous number of adjustable-rate mortgages and all manner of loans pegged to LIBOR. Note the graph below: 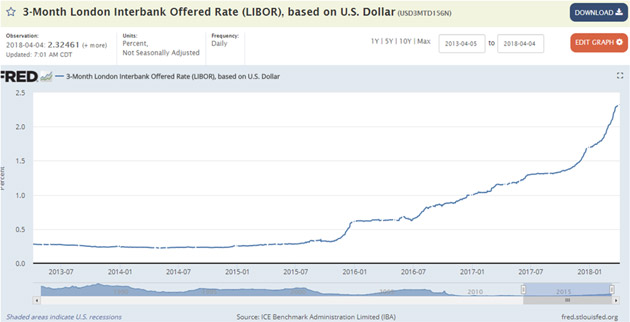 Ambrose concludes by placing these developments in the context of evidence that US, European, and Chinese growth may all be slowing. Yet, he wryly observes,

There is no sign yet that the Fed is having second thoughts about the wisdom of charging ahead with sabers drawn.  The new chairman, Jay Powell, was strikingly hawkish in a recent speech, making it clear that he has no intention of bailing out Wall Street if equities tumble or credit spreads widen. He dismissed short-term shifts in the economy as meaningless noise.

Poor Chairman Powell. Janet Yellen rides off into the sunset and leaves him with a true upside-down mess. Fed rates are 1.625% and inflation is at 2.1%. Essentially we have 50 basis points of negative real interest rates. Jay knows he has to continue to tighten under these circumstances. But he also knows exactly what he’s risking. As the saying goes, he’s in between the devil and the deep blue sea. The heavily Democratically biased Yellen Fed simply did not step up and do their job when the economy was doing well, out of fear of going too far. The moment Trump was elected they got religion about rates – at least three years too late. And Powell get stuck with the Old Maid. (For non-US readers, Old Maid is a children’s card game with one card, the Old Maid, that you don’t want to have in your hand at the end of the game, so you try to pass it off to your fellow players. If you get stuck with the Old Maid, you lose. I think Powell could lose.)

This is important stuff. We’re marching straight into the jaws of what, in last week’s Thoughts from the Frontline, I called the Great Reset. It’s one thing to boldly charge ahead on the policy front but quite another to head off the next global recession, born of chronic monetary and fiscal malfeasance.

By the way, as I was reviewing my information sources the other day, something interesting occurred to me: Some of the best US economic analysis comes from outside the US. In theory, we should have a better grip on our own central bank and government, right? But in fact, my friends in Canada, Europe, Asia and elsewhere deliver consistently cogent thoughts as well. I haven’t done a formal tally, but I suspect I rely on them at least as much as I do on US sources.

Why is that? Maybe it’s because distance gives you a different perspective. Non-Americans aren’t burdened with our cultural assumptions and can look just at the facts. They see things we Americans miss because to us they’re just part of the landscape.

This underscores the importance of having both many information sources and the right sources. And you still have to prioritize, because none of us can read everything that competes for our views. I’ve figured out ways to deal with these issues, and I’ll be sharing them with you. Details soon.

I find myself in Charlotte, North Carolina, where I’m speaking for the S&P Forum. Semi-randomly, good friend Rory Riggs is in town, and we will have lunch in a few minutes. You’re going to hear that name a lot from me over the next few years. He is getting ready to set the investment industry on its ear. Stay tuned…

The US credit markets are flashing a rare warning of economic trouble ahead, signalling that the Federal Reserve risks blundering into another recession without a deft change of course.

A blizzard of surprisingly poor data across the world suggests that the Fed’s liquidity squeeze is taking a greater toll than widely assumed, and that the institution’s staff model has so far failed to pick up the danger signs.

US jobs growth fizzled to stall-speed levels of 103,000 in March. The worldwide PMI gauge of manufacturing and services has dropped to a 14-month low. The average “Nowcast” tracker of global growth has slid suddenly to a quarterly rate of 3.2pc from 4.1pc as recently as early February.

Analysts at JP Morgan say the forward curve for the one-month Overnight Index Swap rate (OIS) – a market proxy for the Fed policy rate – has flattened and “inverted” two years ahead. This is a collective bet by big institutional investors and fund managers that interest rates may be falling by then.

It is a market verdict that Fed officials have lost touch with reality in thinking that they can safely raise rates another seven times to 3.5pc by late 2019, as implied by the “dot plot” forecast. It is tantamount to a recession warning. 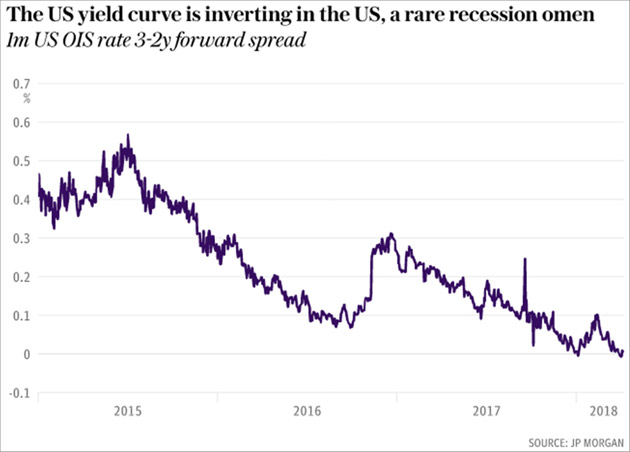 “An inversion at the front end of the US curve is a significant market development, not least because it occurs rather rarely. It is generally perceived as a bad omen for risky markets,” said Nikolaos Panigirtzoglou, JP Morgan’s market strategist.

The OIS yield curve has inverted three times over the last two decades. In 1998 it proved to be a false alarm because the Greenspan Fed did a pirouette and flooded the system with liquidity. In 2000 it was a clear precursor of recession. In 2005 it signaled that the US housing boom was already starting to deflate.

Fed officials tend to watch a different signal – the moment when the 10-year US Treasury yield drops below the two-year yield – deeming this the best single predictor of recessions in a study last month by the San Francisco Fed.

This has not yet been triggered. The problem is that this tends to happen several months after the OIS rate curve has already inverted. By then it is often too late. Trouble is already baked into the pie.

“We think that the current expansion will begin to fizzle out before long. US equities are likely to suffer once the US economy stalls, and a weaker US stock market would almost certainly be contagious, especially if growth in the rest of the world also faltered,” said Finn McLaughlin from Capital Economics.

The Fed’s monetary tightening is now biting hard. Growth of the “broad” M3 money supply in the US has slowed to a 2pc rate over the last three months (annualised) as the Fed shrinks its $4.4 trillion (£3.1 trillion) balance sheet, close to stall speed and pointing to a “growth recession” by early 2019. Narrow real M1 money has actually contracted slightly since November.

This suggests that the reversal of quantitative easing may matter more than generally appreciated. The Fed’s bond sales have been running at a pace of $20bn a month. This rises to $30bn this month, reaching $50bn by the fourth quarter. RBC Capital Markets says this will drain M3 money by roughly $300bn a year, ceteris paribus.

What worries monetarists is that the Fed intends to step up the pace of quantitative tightening (QT) regardless of the monetary slowdown. The institution adheres closely to a New Keynesian “creditist” model and pays little attention to monetary aggregates. This proved a costly mistake in 2008.

US rate rises are having a parallel effect, but through a different mechanism. Three-month Libor rates – used to set the cost of borrowing on $9 trillion of US and global loans, and $200 trillion of derivatives – have surged 60 basis points since January. 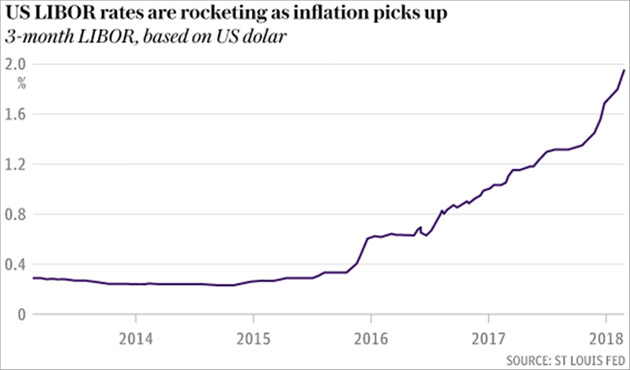 There is no sign yet that the Fed is having second thoughts about the wisdom of charging ahead with sabers drawn.  The new chairman, Jay Powell, was strikingly hawkish in a recent speech, making it clear that he has no intention of bailing out Wall Street if equities tumble or credit spreads widen. He dismissed short-term shifts in the economy as meaningless noise.

The Fed view is that Donald Trump’s unwarranted fiscal stimulus – lifting the budget deficit to 5pc of GDP at the top of the cycle – is inflationary and increases the risk of over-heating.

The signs of a slowdown are even clearer in Europe where the low-hanging fruit of post-depression recovery has largely been picked and the boom is fizzling out, exposing the underlying fragilities of a banking system with €1 trillion of lingering bad debts.

Citigroup’s economic surprise index for the region has seen the worst four-month deterioration since 2008.  A reduction in the pace of QE from $80bn to $30bn a month has removed a key prop. The European Central Bank’s bond purchase programme expires altogether in September.

What is surprising is that Germany is slowing hard despite a seriously undervalued currency (for Germany, not for France or Italy). Industrial output has contracted over the last three months and exports suffered the steepest dive for three years in February.

Germany is highly leveraged to the Chinese industrial cycle so this may be a sign that Chinese growth has slowed more than the authorities admit – as indicated by plummeting yields on Chinese bonds, and rates on three-month Shibor and certificates of deposit. 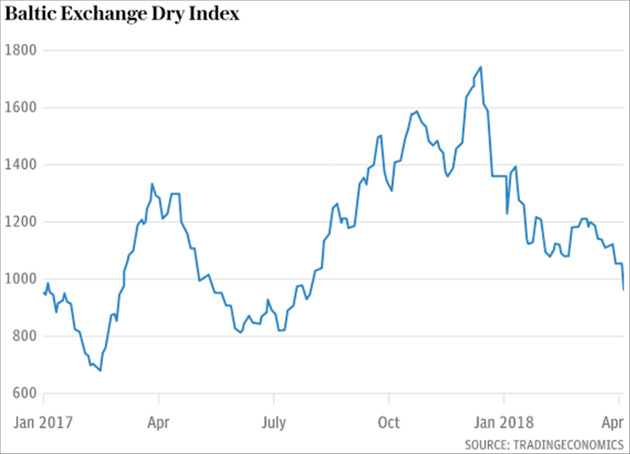 The world economy was coming off the boil even before President Trump launched an escalating trade war against China. The global money supply has been slowing since last September. The Baltic Dry Index measuring freight rates for dry goods peaked in mid-December and has since dropped 45pc.

The Fed, the ECB, and the global authorities insist that this is a temporary “air pocket”, and that synchronized world growth is alive and well. The bond markets do not entirely believe them.