The United States, Turkey, and Russia have deployed forces to fight against the Islamic State in a run-up to the final battle for Raqqa. No one has made a definitive move. This is because the oncoming battle for control of the IS heartland is complicated by geography and the conflicting imperatives of regional and international actors expected to participate in the offensive.

Time is running out…

With a little over three weeks until our inaugural conference, excitement is building at Geopolitical Futures. The GPF analysts, Meredith, and I are very much looking forward to welcoming you to the Army and Navy Club in Washington, DC, on April 5, for a full day of measured debate and free-flowing discussion.

Don’t have a ticket for The Next 4 Years: The Role of the United States in the World yet? There are a few remaining. Please click this link to secure your ticket, find out more about the venerable panel of speakers, or ask us a question about the conference.

Now, let’s look at Raqqa. Until a decision is reached among all parties on the approach to Raqqa and how to proceed afterward, no meaningful moves can be made on IS. These four graphics show the complexity of the battle for Raqqa and why it will be a marathon rather than a sprint. 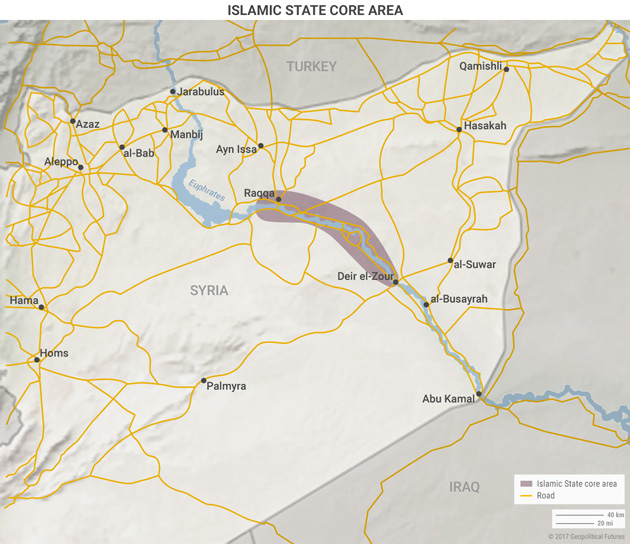 Several spheres of influence exist within Syria. While the Islamic State has maintained control of Raqqa and surrounding areas along the Euphrates River since 2013, it recently suffered territorial losses to the east, west, and north as part of Operation Euphrates Wrath, led by the Syrian Democratic Forces (SDF).

The Syrian Arab Army, along with Hezbollah fighters and Russian air power, have retaken Palmyra to the west of IS’s core territory. The Kurdish-led SDF occupies territory directly to the northeast of Raqqa, and Turkish-backed rebels have taken control of the area northwest of the Euphrates River to block the Kurds from establishing a foothold on the Turkish border.

IS is now effectively surrounded on three sides by regional powers with international support. Jordan sits along IS’s southern outskirts. Though vast desert leaves IS with few gains to be made, it has not stopped the group from trying to expand its sphere of influence over its southern border.

While IS has been losing territory for over a year, most of that territory was not strategically important. Now, IS faces existential threats to its power, but a final blow can’t be struck without a cohesive plan of attack and a strategy for maintaining the territory post-IS.

The fight for the IS stronghold will require large numbers of ground troops in concert with air power and artillery. Fighting through a city—particularly a city with a large civilian population—means a very high casualty rate for the assaulting force.

It is slow, dangerous work that must be done block by block rather than in large-scale air attacks. For example, Iraqi’s Counter Terrorism Service (CTS) led the “Golden Division” in the battle for Mosul, a large city center similar to Raqqa. Some CTS divisions suffered casualty rates up to 50% while fighting in the city.

Before we can discuss the battle for Raqqa, it is vital that we look at the city itself and the current thoroughfares running to and from the de facto IS capital. 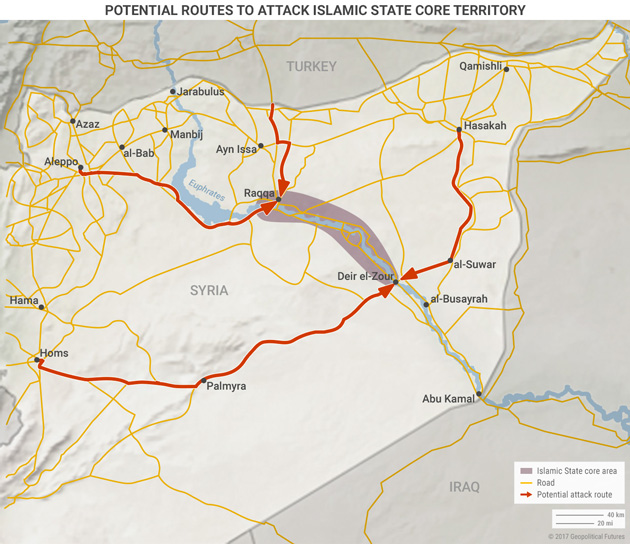 The map above shows the main roads surrounding IS core turf with the capital city in the middle. Raqqa is located on the Euphrates River surrounded on all sides by desert. In 2012, the civilian population totaled about 200,000 (although that number has fluctuated). Raqqa has been the capital of the IS heartland since 2013.

Because IS essentially is fighting on its home turf, it has established defenses around the city and is aware of likely attack routes. This is why an invading force must match its relative gains to expected losses.

Many regional and international actors have conflicting goals in Syria. The Turkish imperative is to halt the threat from the Islamic State while suppressing the Kurds. The Turks also are trying to limit their direct exposure to the conflict by supporting the Sunni Arab-dominated Free Syrian Army (FSA) to take the lead in advancing on the city.

The United States has backed the SDF throughout most of the conflict, but the group is beginning to outlive its utility in the face of the Turks, who are currently fighting to push the Kurds back to the eastern side of the Euphrates. This takes the Kurds out of the lead for the assault on Raqqa.

Russia has brought both air power and ground troops into Syria to support the Bashar al-Assad regime, but those troops lack the military capability to lead the charge. Russia’s forces in Syria were meant to prop up the Assad regime and were successful in doing so. But those forces are not significant enough to be decisive against IS. 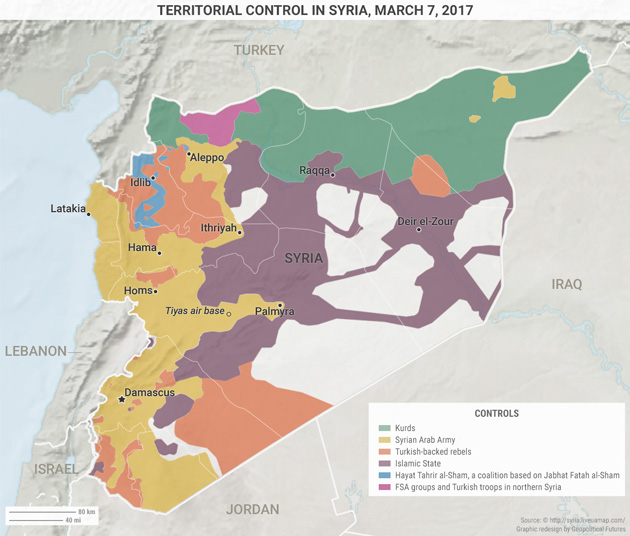 Ultimately, the battle for Raqqa is a series of simple questions: Who will go in? Where will they come from? How will they get out? And who will remain?

This map represents the four main routes Geopolitical Futures previously identified as viable for an attacking force. The SDF can advance from its territory in the northeast (from Hasakah across the Euphrates to Deir el-Zour) though the Turks do not want any Kurdish forces to enter the city.

The Russian-backed Syrian Arab Army can move on the southern part of the IS heartland (from Homs by way of Palmyra), which the army currently controls. Assad’s forces can attack from the northwest through the checkerboard of forces occupying the area around Aleppo. Finally, the Turkish-backed FSA can approach from directly north of Raqqa, across the Turkish border from the town of Tal Abyad.

Each of these options provides challenges and opportunities for the force that moves on the city, but each actor has the ability to change the calculus for the other forces. For example, the SDF proved in January that it was possible to blend these routes of attack by taking and holding Tabqa Dam west of Raqqa. This effectively shuts off that route to the west for anyone who is not working with the SDF. At the end of the day, the deciding factor in the battle for Raqqa is the relative strength of the approaching army rather than the route they use. 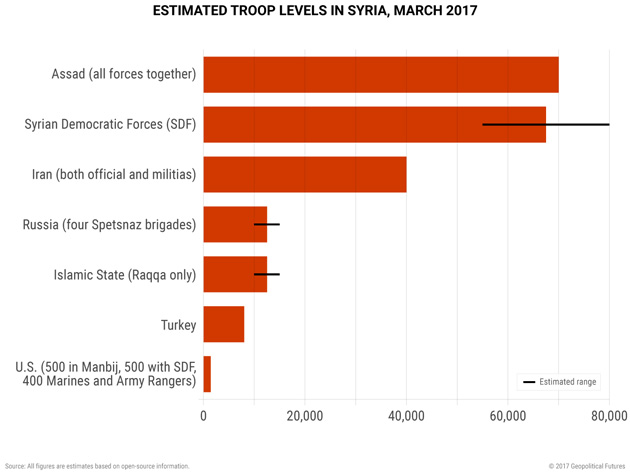 The above graph shows the estimated power of forces in the area. The largest force is the Syrian Arab Army to the west and northwest, with about 70,000 troops. The SDF to the northeast is estimated at 55,000–80,000 soldiers, though they are constrained by Turkish ambitions. Russia has deployed an additional 10,000–15,000 troops. Turkey commands an estimated 8,000 troops that include the FSA, who were deployed for Operation Euphrates Shield. The US has about 1,400 special operators in the battlespace to act in an advisory and assistance capacity.

Though actual numbers for IS are unknown, GPF estimates that 10,000–15,000 IS fighters are in Raqqa. Though IS troop numbers are lower, its entrenched position in the city’s center and fighting experience give it an advantage over any force trying to dislodge its fighters.

The Islamic State has a formidable force of experienced soldiers who have shown themselves to be adaptable to a changing battlefield. They will not be dislodged from Raqqa easily or quickly. Regardless of relative troop size, defenses, and civilian population, the cost of clearing IS militants from their core turf will be extremely high for whichever force attacks the city.